Troy Aikman is Sick & Tired of Dallas’s Many Potholes

Troy Aikman is sick and tired of the potholes on Dallas roads, and he’s not going to take it anymore.
Or, at least, he’s going to rip the potholes on Twitter. Aikman got fed up with the issue of potholes in Dallas on Sunday, presumably after driving over a pothole in Dallas. Maybe it was really jarring and he winced as the coffee he JUST bought at Starbuck’s spilled on his lap, and maybe he was wearing new shorts that day. Maybe he grumbled, “WELL THAT’S JUST GREAT” and then let out a really loud string of obscenities but it was OK because he was in the privacy of his car. We’ve all done that When he got to where he was going, maybe he looked at his tires to make sure no severe damage was done, and then said, “No more. The people need to hear the truth about the excessive potholery of these roads.” Maybe. All we know for sure is Aikman tweeted: “Are there any worse roads in the country than we have in Dallas?? Not anywhere I’ve traveled. #potholeseverywhere” Actually, according to The Road Information Project, via D Magazine, Dallas isn’t even the top ten in terms of cities with pothole problems. But point taken all the same, Mr. Aikman. 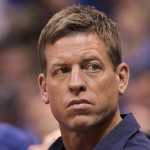