1st Ethanol pump station in the US owned by a car dealership for public use had its grand-opening on March 28th. General Motors sponsored this inaugural at Classic Chevrolet’s- Hummer dealership in Grapevine, Texas. Classic Chevrolet serving the entire DFW; Dallas, Fort Worth, Arlington, Denton, Carrollton and the surrounding area; sold more Chevorlet trucks than any dealer in the nation in 2007.

The promotion sponsored by GM, offered Ethanol from 7:00 A.M. to 9:00 A.M. for less than a dollar–– .85 cents to be exact. Within the two hours, the event totaled the sale of 3,200 gallons of E85. The new Biofuel pump station will be open 7 days a week, it is centrally located between Dallas and Ft. Worth at 1101 Highway 114 W. Grapevine, TX 76051. It is a combination of a Hummer dealership, Mr. Good Wrench Quick Lube Plus and a filling pump for Ethanol, unleaded and Biodiesel.

GM is committed to promote the use of alternative fuels that makes sense economically and environmentally including biofuels and hydrogen.

The pumps include E85––85% ethanol and 15% gasoline blend; to be used with FlexFuel vehicles only. Unleaded, enriched with ethanol and contains up to 10% ethanol, can be used in gasoline engines and Biodiesel; to be used in diesel engines only. They nozzles are color coded and marked with icons to insure no confusion which pump to use.

E85 normally is sold for $2.74 a gallon, a bit cheaper than regular gasoline. The benefit is a cleaner-burning, less polluting and renewable alternative fuel which is principally made from corn.

There are 1,500 pump station in the US, they accounts for 12% of total fuel sales. The cost of a station such as the one at Classic Chevrolt- Hummer in Grapevine could cost as much as $500,000 to build from the ground up.

With fewer than 1% of filling stations nationally offering E85, this pump station addition could be the start of making alternative fuel available in alternate locations

Enterprise Rent-A-Car, which operates a rental branch within Classic dealership will dedicate 25% of its fleet of vehicles at the branch to GM’s FlexFuel models. It is the eighth FlexFuel

Enterprise outlet in the nation.

GM is the leader, with more than 3 million flex-fuel vehicles on the road in the US. It is pledging to double FexFuel vehicles production by 2010.

As part of this commitment GM’s Hummer division has announced the 2009 E85-capable H2 SUT (sports utility truck) at Classic Hummer last Friday, one of more than 15 FlexFuel models GM will offer for the 2009 model year.

What is E85?, It is 85% ethanol and 15% gasoline mixed to give you what is referred to as E85. Ethanol is made by fermenting and distilling starch and sugar crops such as maize, sorghum, potatoes, wheat, sugar-cane and corn.

According to the US Department of Energy’s National Renewable Energy Laboratory, it is a clear, colorless liquid with a characteristic, agreeable odor.

A gallon of E85 has 20 to 25 percent less energy density than unleaded gasoline A study by Argonne National Laboratory showed 23 to 29 percent fewer greenhouse gas emissions from E85 fuel than from gasoline. E85 has also about 96 octane compared with 87 octane for regular unleaded. That can mean performance boost in many vehicles. For further information on FlexFuels. log on www.e85fuel.com. 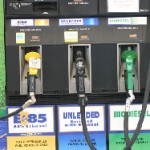