Last year’s top story was Hurricane Katrina and the other devastating Gulf Coast storms. The Iraq war finished third in that poll, was runner-up in 2004 and the No. 1 story in 2003, while the buildup to the war was 2002’s top story.

Here are 2006’s top 10 stories, as voted by AP members. There was a tie for seventh place:

1. IRAQ: What started in 2003 as a supposedly straightforward drive to topple Saddam Hussein deteriorated during 2006 into a dismayingly complex and savage struggle, with Iraqis by the thousands killed in sectarian reprisal attacks and the U.S. military death toll nearing 3,000. President Bush dropped talk of “staying the course” but balked at embracing many of the key suggestions of a bipartisan study group; Iraqi authorities struggled to assert control and avoid fracture.

2. U.S. ELECTION: Unhappiness with events in Iraq was one of the driving forces behind the Democrats’ surge in the Nov. 7 election. They took over the House with a large majority, gained a narrow edge in the Senate, and also advanced in statehouses nationwide. Nancy Pelosi, assailed by the Republicans as a “San Francisco liberal” during the campaign, will become the first female speaker of the House.

3. NUCLEAR STANDOFFS: The United States and its allies were frustrated in their efforts to rein in nuclear programs in North Korea and Iran. North Korea tested a nuclear bomb in October, and Iran — despite a threat of sanctions — pushed ahead with plans to bring its first nuclear power plant on line in late 2007.

4. ILLEGAL IMMIGRATION: Congress tried to confront the influx of illegal immigrants from Latin America, but the effort collapsed amid deep divisions over whether to stress a crackdown or include provisions to help some illegal immigrants work toward citizenship. The get-tough approach triggered huge protests by immigrants-rights supporters.

5. SCANDALS IN CONGRESS: Several Republican congressmen were brought down by scandals, including Mark Foley, who resigned over sexually explicit messages sent to male pages, and Randy Cunningham, who pleaded guilty to accepting bribes from defense contractors. House Majority Leader Tom Delay resigned after being indicted on campaign finance charges in Texas, and Ohio’s Bob Ney pleaded guilty in connection with the probe of lobbyist Jack Abramoff.

6. SADDAM CONVICTED: Saddam Hussein was convicted in the slaying of 148 Shiite Muslims, including children, following an assassination attempt against him in 1982. He was sentenced to death by hanging, but proceedings against him continued on genocide charges stemming from a chemical attack on Kurds in 1987.

7. MIDEAST FIGHTING: Israel and the Lebanon-based Hezbollah militia fought a monthlong war in the summer; more than 900 people were killed and much of southern Lebanon was battered. Lebanon’s Western-backed government emerged more embattled than ever, while Hezbollah claimed increased popular support.

7. RUMSFELD RESIGNS: As conditions worsened in Iraq, President Bush publicly stuck by his defense secretary. But a day after the midterm elections gave Democrats control of Congress, Bush announced Donald Rumsfeld’s departure. Though his brusque style initially won some admiring reviews, Rumsfeld was seen as underestimating Iraq’s challenges while alienating the military brass and members of Congress.

9. AIRLINER PLOT: British authorities said they narrowly thwarted a terrorist plot to bomb several jets over the Atlantic. The disclosure led to tough new restrictions on the contents of carry-on luggage.

10. DISASTER IN DARFUR: Violence worsened in Sudan’s Darfur region, where fighting between rebels and government forces has killed more than 200,000 people. The United Nations approved a 20,000-strong peacekeeping force, but Sudan blocked its deployment.

Just missing out on the Top 10 was mounting concern over climate change and global warming, highlighted by the release of Al Gore’s movie, “An Inconvenient Truth,” and alarming new warnings from many scientists. Several voters remarked on how Iraq — and its ripple effects — dominated the year. “All news paled in comparison to the developments in the Middle East, which are beginning to be felt in every community,” wrote Ken Stickney of The News-Star at Monroe, La. 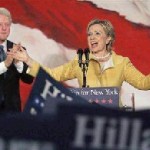