“We promised that 70 percent of our Ford, Lincoln and Mercury lineup would be new or significantly upgraded by the end of next year. With our 2008 showroom, we’re halfway there,” notes Mark Fields, Ford’s president of the Americas.

In the crossover market, Ford Motor Company is setting the pace with newer entries, such as the Ford Edge and the Lincoln MKX, which have led a year-to-date increase in total Ford, Lincoln and Mercury crossover sales of 37 percent through May – the largest increase among major manufacturers and well above industry-wide crossover growth of 17 percent. In May alone, the Ford Edge outsold all mid-size crossovers, including the Honda Pilot, Toyota Highlander and Nissan Murano.

In the passenger car market, the Ford Fusion has emerged as the preferred choice of many mid-size car buyers. Through May, Fusion sales were up 15 percent over a year ago. In two separate head-to-head consumer challenge drives organized by Car and Driver and Road&Track magazines, the Fusion all-wheel-drive sedan beat the Toyota Camry and Honda Accord in styling, handling, performance and fun-to-drive categories. Along with the Lincoln MKZ and Mercury Milan, Fusion attracts new customers to Ford, with conquest sales of 40 percent.

In the pickup market, Ford continues to build on its 30 years of truck leadership. First, the 2008 F-Series Super Duty brought a series of industry-first features to the heavy duty truck segment. It has set the stage for this fall’s arrival of the 2008 F-150, which delivers more firsts to the full-size pickup segment along with an expanded model lineup.

Additionally, 12 models in the 2008 lineup will distinguish themselves through the availability of Ford Sync™, an exclusive hands-free, in-car communications and entertainment system developed with Microsoft that fully integrates mobile phones and media players into the vehicle through voice recognition, Bluetooth technology and USB connectivity.

There’s also more evidence of quality improvements at Ford, Lincoln and Mercury. Ford Motor Company has the most top-quality vehicles in the industry, according to a customer-based initial quality survey released by J.D. Power and Associates. 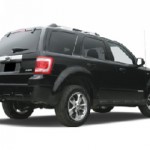