DETROIT – Throughout its history, Chevrolet has offered stylish, affordable and dependable family cars with a little something extra.
In the case of the 2013 Malibu, that something extra is an all-new 2.0L turbocharged engine designed to infuse the new Malibu midsize sedan with real Chevrolet spirit.
“The all-new turbocharged engine showcases just how capable the new Malibu is, and the turbocharged Malibu is perfect for customers who want a midsize sedan that is fun to drive under a wide range of real-world conditions,” said Mark Meyers, GM global vehicle performance manager.
The Malibu turbo can sprint from 0 to 60 mph in 6.3 seconds and achieve a top speed of 155 mph. Even with this performance delivered by its 259-horsepower (193 kW) engine, the Malibu turbo has an EPA-estimated fuel economy of 21 city and 30 mpg highway.
With its peak torque of 260 lb.-ft. (353 Nm) sustained between 1,700 and 5,500 rpm, the turbocharged engine also gives Malibu excellent response under a broad range of driving conditions. This added performance comes with greater refinement as the enhanced torque reduces downshifts and helps quiet the buzz sometimes found in four-cylinder engines.
Malibu turbo includes a four-wheel-independent suspension system, hydraulic ride bushings, premium electric steering gear and more.
“With its global pedigree and European tuning, the new Malibu has a robust body structure, premium steering and suspension, and substantial four-wheel disc brakes,” said Meyers.
Performance and value
The Malibu turbo goes on sale this fall, available as both a mid-level LT model with a suggested retail price of $27,710 and as a more luxurious LTZ model with a suggested retail price of $30,925. Both prices include a $995 dealer freight charge. 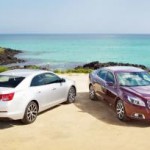