Three students were shot outside Pittsburgh Brashear High School in Beechview this afternoon after school let out, Pittsburgh police said.
Major crimes unit Lt. Kevin Kraus said police, including members of the SWAT team, surrounded 1528 and 1530 Rockland Ave. following the shooting and took six people, including a small child, to headquarters to be questioned by homicide detectives. He did not clarify their connection to the investigation.
All of those shot were male. One of the students shot was grazed in a leg and foot. Another was hit in the neck and a shoulder. The third was grazed in the head and went back toward the school, where an administrator pulled him inside.
Pittsburgh public safety director Michael Huss said just before 5 p.m. the scene was secure and officers were being sent back to their usual assignments. He and acting police Chief Regina McDonald said students running back toward the school created initial confusion about where the shooting took place.
That confusion meant more police showed up at the school than were needed.
«We train on this, we plan that reaction when that call goes out, you go and neutralize it,» Mr. Huss said.
The shooting at 590 Crane Ave. was reported about 2:50 p.m.. The school day there ends at 2:46 p.m. Police said three men dressed in black were reported shooting toward the school from a hill above.
An Allegheny General Hospital spokesman confirmed one male high school student was a patient and that his condition was considered stable. AGH trauma surgeon Alisa Cross said that student was expected to make a full recovery.
Police said the two other students were taken to UPMC Mercy. Outside the hospital, Danielle Eberhardt waited for answers. She said she got a call that her son, Robert Minor, was shot in the neck and taken to Mercy. His brother, Dajaun Law, said Robert is in 11th grade at Brashear.
Police said the three people shot knew the shooter or shooters. Pittsburgh police said information from school officers indicated today’s shooting might be linked to a fight near the school Oct. 18 — possibly drug-related — which led to a lockdown there for a week.
One student withdrew from enrollment at the school and the lockdown was lifted, police spokeswoman Diane Richard said.
«It has nothing to do with the school,» Lt. Kraus said. «It just happened near the school.»
Jacklyn Reft, a Brashear junior, said about a hundred students were still in the building when the shooting began. She was at cheerleading practice.
«We all got into a little bit of a panic,» she said.
She said she didn’t remember the October fight or a lockdown — but that there are always fights at the school.
The school uses a code over loudspeakers — «Mrs. Red is in the building» — to announce emergencies and schedules drills for that warning system throughout the school year, Jacklyn said.
That warning did not come today, she said.
Instead, faculty and administrators came quietly and got students who were still in building.
Brashear is Pittsburgh Public Schools’ largest high school by enrollment with 1,416 students. A portion of the same building houses South Hills Middle School, which has 580 students.
About 5 p.m., Pittsburgh Public Schools superintendent Linda Lane issued a written statement saying both Brashear High and South Hills Middle will be open tomorrow but will be on a modified lockdown for the rest of the week. Only students, staff and visitors with scheduled appointments will be admitted to the schools.
«We are taking this matter seriously and focusing on the safety of our students,» she said in the statement. «Our thoughts go out to the families of the victims.»
She said the incident did not take place on school property.
Brashear and South Hills parents were notified via a phone alert system.
Nick LoRusso, of Beechview, was standing in his backyard two streets uphill from Brashear when he heard a boom and what he said sounded like seven or eight shots from a semi-automatic weapon.
Then he heard sirens.
Pittsburgh Public Schools board president Sharene Shealey said, «It’s just really sad that children can’t go to school and be safe. I hope they catch whoever did this. I hope those kids are OK, and I’m praying for their families.»
School board member Sherry Hazuda’s backyard abuts the woods where the suspect or suspects were being sought. Her district includes Brashear.
«It’s horrible,» she said, adding, «I am praying for the kids. They need to be OK … It’s just sad.» 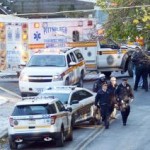