With a nod to current youth culture, Scion revealed the much-anticipated all-new 2008 xD five-door subcompact and the all-new, second generation xB urban utility vehicle at the 2007 Chicago Auto Show, with a simultaneous press conference in Scion City, in the virtual world “Second Life.”

“The xD is a clever new take on the five-door urban subcompact, with style and flair to match its efficiency and utility,” said Mark Templin, Scion vice president. “The xD’s aggressive styling is wrapped in a small, agile package, while its interior offers impressive details and a spacious cabin.”

The xB was first introduced in early 2003 for the 2004 model year and its boxy shape became iconic to the Scion brand. “No one in the automotive industry is as hard-wire-connected to its owners as is Scion, and the 2008 xB is a perfect example,” said Mark Templin, Scion vice president. “We’ve stated in the past that we’ll probably always have a box in the Scion lineup, but our owners told us they wanted a bigger box. They talk, we listen and we responded with a bigger and better xB.”

As fun, functional and stylish as ever, both cars maximize contemporary solutions for modern day drivers’ concerns. Both cars have multiple storage capacities with driver’s trays, glove boxes, console boxes to hold portable music players or cell phones, and hidden rear storage trays to accommodate small items like magazines, cameras, laptops, cell phone chargers and CDs. And in keeping up with the relevant advances in portable audio systems, both the xD and xB’s standard 160-watt maximum output Pioneer audio system features iPod connectivity and a mini-jack port located beneath the HVAC controls for easy access. The optional premium audio system adds one more feature to the standard head unit, the ability to download “skins” to play on the LCD faceplate. 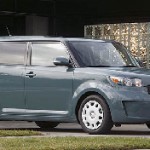