Carmen García is a natural born emissary. An emissary is an agent sent on a mission to represent or advance the interests of another. So far, she has advanced the interest of everyone from the Dallas Zoo to the Secretary of Texas State’s Office.

García began her career in governmental affairs with company called ARCO in Houston, Texas, 1982. ARCO has been her training ground and a springboard that has propelled her career to the heights of local and state politics, entrepreneurship, community involvement, and private non-profit enterprising.

Her mentor at ARCO, Dan Robertson, pushed and pulled out her best talents: communication, administration, marketing, and establishing prosperous relationships with colleagues and community partners across a broad spectrum of influence.
Mr. Robertson, who happened to be friends with former Dallas Mayor Ron Kirk, convinced Carmen to go back to school and finish her degree. Carmen was fortunate to attend and graduate from Dallas Baptist University where she entered a degree program partially based upon work experience. She was able to use her real life experience as credit toward her degree in Public Administration. ARCO matched her efforts with 80% tuition reimbursement.
In 1994, As she continued to built bridges and contacts, García had the opportunity to direct programs and special projects in the offices of the Texas Comptroller of Public Accounts and the Texas Secretary of State in Austin.
In 1995, She returned to Dallas to manage Ron Kirk’s campaign office in his successful bid for mayor. After the victory with the Kirk campaign, García launched out on her own and started a marketing and public relations firm, ABRAC which is an acronym for A Business Relations Advisory Company.
With a top-of-mind attitude, she named her company so that it would be at the top of the alphabet and would incite a great conversation piece at networking mixers. ABRAC catered to Fortune 500 companies, local and state non-profits, and of course, The State Fair of Texas, who became one of her premiere clients.
Six years later, The State Fair created a job specifically for her. Big Tex wanted her to direct the State Fair’s diversity initiatives. García is currently the Director of Community Affairs for the State Fair of Texas. Over 3 million people visited the fair last year and she wants to increase that number especially with minorities from around the state. “We have to be creative, and continue to let people know that there is ‘something for everyone to do at the State Fair.” This year’s theme will be “Big Tex and the City”.
She remains actively involved in numerous community organizations locally and throughout the state. García has an impressive and extensive track record. She has received numerous awards and accolades for her community involvement and diversity advocacy.
García sits on the boards of the Dallas Zoo, Greater Dallas Planning Council, Hispanic Women’s Network of Texas, African American Museum and Texas Association of Mexican American Chambers (TAMACC). She is the Past President of Hispanic 100 and currently serves as Vice Chair Women’s Issues for TAMACC , Chair-Elect of the Hispanic Women’s Network of Texas, and co-chair of the Legislative Committee for the Greater Dallas Hispanic Chamber.
García has fostered such great relationships that all she has to do is basically “pick up the phone” in order to get the ball rolling.
Never resting on her accomplishments, Ms. García aims to work on Capital Hill in Washington, DC. Whether or not that opportunity will presents itself, Ms. García still looks to mentor a teen or young professional. “I need to be a mentor to someone.“ The emissary wants to pass down some of the lessons that she learned in business and with community organizations.
As an avid daily newspaper reader, who stays abreast of all things current, Carmen García admits that “I am a team player and there is still room to grow, but it’s about knowing who you are and knowing where you want to go.” In her own words, “Public administration is really my forte.” 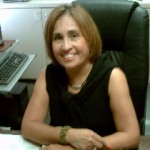 ...Carmen García is an enormous responsability as the Director of Cultural Affairs for The Texas State Fair. Here at work happy leading her Team and Staff.