Celebration Marked a Milestone as the Top Arch Piece was Placed . . . The Trinity Trust Held a Celebration and Toast in Honor of Margaret Hunt Hill Family

DALLAS, Texas, June 30, 2010.- On June 28, The Trinity Trust Foundation hosted a celebration to honor to Margaret Hunt Hill family for making possible the lead gift that helped to fund the bridge that will connect West Dallas to downtown Dallas. Al Hill, Jr., Lyda Hill and Alinda Hill Wikert, children of the late Margaret Hunt Hill, were honored for their dedication and support for their mother’s bridge. Several grandchildren, additional family members and another 100 people also watched a touching video of the bridge and arch construction, including the Dallas City Council and other elected officials.
The celebratory event and champagne toast were held in the Haynes and Boone, LLP office overlooking the Trinity River Corridor and the gleaming white 400-foot Margaret Hunt Hill Bridge arch. On june 26, construction workers placed the final keystone piece, weighing 150 tons, on top of the bridge. Scheduled to open in 2011, the Santiago Calatrava-designed bridge will change the skyline of Dallas.
Dr. Gail Thomas, president of The Trinity Trust, thanked everyone for coming. «How do you like our new skyline? A special thanks to the Margaret Hunt Hill family including Al Hill, Jr., Lyda Hill and Alinda Wikert. We thank our architect, engineer and poet Santiago Calatrava, who couldn’t be here, but he sends his congratulations and best wishes. We’re grateful for Cimolai, the steel fabricator. Thanks to Doug Pitcock and Bill Doreen with Williams Construction who are doing so much for our city.»
«Now I want to introduce Mayor Tom Leppert who inherited the vision of the Trinity River Corridor Project from Mayors Ron Kirk and Laura Miller, and who has carried the vision forward with great passion.»
Dallas Mayor Tom Leppert said, «This bridge, this arch, will be symbolic of all things in Dallas and North Texas, and it will show that we moved forward. The bridge will be the foreground and background of every image.»
Mayor Leppert then introduced U.S. Senator Kay Bailey Hutchinson
«We have two giants in Washington, DC, Congresswoman Eddie Bernice Johnson couldn’t be here today. In the Senate, we have this woman who is willing to stand, be it funding or regulatory work. We wouldn’t be here without you. Please welcome Senator Kay Bailey Hutchinson.»
U.S. Senator Kay Bailey Hutchinson said, «This bridge is something no other city has, and it will define the Dallas skyline.
The arch and the bridge were the beginning steps that will spur the next steps of the Trinity project. I also want to say a special thank you to the Hill family who contributes in so many ways and in honor of their mother, Margaret Hunt Hill.»
Finally, Mary McDermott Cook, chair of The Trinity Trust, said, «Thank you, Al, to you, your sisters and your family, for the gift you’ve given Dallas. Mayor Leppert, thank you for carrying out the vision started by two previous mayors. Kay (Senator Kay Bailey Hutchinson), without you, this Trinity Project wouldn’t be happening. Now, let’s raise our glasses and toast the Margaret Hunt Hill family and this bridge!» 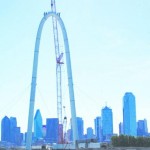 ...On June 26, construction workers placed the final keyston piece, weighing 150 tons, on top of the Margaret Hunt Hill Bridge over the Trinity River Corridor. The new bridge and arch will redefine the Dallas skyline.