Former Vice President Dick Cheney warned that there is a “high probability” that terrorists will attempt a catastrophic nuclear or biological attack in coming years, and said he fears the Obama administration’s policies will make it more likely the attempt will succeed.

In an interview Tuesday with Politico, Cheney unyieldingly defended the Bush administration’s support for the Guantanamo Bay prison and coercive interrogation of terrorism suspects.

And he asserted that President Obama will either backtrack on his stated intentions to end those policies or put the country at risk in ways more severe than most Americans — and, he charged, many members of Obama’s own team — understand.

“When we get people who are more concerned about reading the rights to an Al Qaeda terrorist than they are with protecting the United States against people who are absolutely committed to do anything they can to kill Americans, then I worry,” Cheney said.

Protecting the country’s security is “a tough, mean, dirty, nasty business,” he said. “These are evil people. And we’re not going to win this fight by turning the other cheek.”

Citing intelligence reports, Cheney said at least 61 of the inmates who were released from Guantanamo during the Bush administration — “that’s about 11 or 12 percent” — have “gone back into the business of being terrorists.”

The 200 or so inmates still there, he claimed, are “the hard core” whose “recidivism rate would be much higher.” (Lawyers for Guantanamo detainees have strongly disputed the recidivism figures, asserting that the Pentagon data have inconsistencies and omissions.) Cheney called Guantanamo a “first-class program,” and “a necessary facility” that is operated legally and with better food and treatment than the jails in inmates’ native countries.

But he said he worried that “instead of sitting down and carefully evaluating the policies,” Obama officials are unwisely following “campaign rhetoric” and preparing to release terrorism suspects or afford them legal protections granted to more conventional defendants in crime cases.

The choice, he alleged, reflects a naive mindset among the new team in Washington: “The United States needs to be not so much loved as it needs to be respected. Sometimes, that requires us to take actions that generate controversy. I’m not at all sure that that’s what the Obama administration believes.”

The dire portrait Cheney painted of the country’s security situation was made even grimmer by his comments agreeing with analysts who believe this recession may be a once-in-a-century disaster.

“It’s unlike anything I’ve ever seen,” Cheney said. “The combination of the financial crisis that started last year, coupled now with, obviously, a major recession, I think we’re a long way from having solved these problems.”

The interview, less than two weeks after the Bush administration ceded power to Obama, found the man who is arguably the most controversial — and almost surely the most influential — vice president in U.S. history in a self-vindicating mood.

He expressed confidence that files will some day be publicly accessible offering specific evidence that waterboarding and other policies he promoted — over sharp internal dissent from colleagues and harsh public criticism — were directly responsible for averting new Sept. 11-style attacks.

Not content to wait for a historical verdict, Cheney said he is set to plunge into his own memoirs, feeling liberated to describe behind-the-scenes roles over several decades in government now that the “statute of limitations has expired” on many of the most sensitive episodes.

His comments made unmistakable that Cheney — likely more than former President Bush, who has not yet given post-White House interviews — is willing and even eager to spar with the new administration and its supporters over the issues he cares most about.

His standing in this public debate is beset by contradictions. Cheney for years has had intimate access to the sort of highly classified national security intelligence that Obama and his teams are only recently seeing.

But many of the top Democratic legal and national security players have long viewed Cheney as a man who became unhinged by his fears, responsible for major misjudgments in Iraq and Afghanistan, willing to bend or break legal precedents and constitutional principles to advance his aims. Polls show he is one of the most unpopular people in national life.

In the interview, Cheney revealed no doubts about his own course — and many about the new administration’s.

Cheney said “the ultimate threat to the country” is “a 9/11-type event where the terrorists are armed with something much more dangerous than an airline ticket and a box cutter – a nuclear weapon or a biological agent of some kind” that is deployed in the middle of an American city.

“That’s the one that would involve the deaths of perhaps hundreds of thousands of people, and the one you have to spend a hell of a lot of time guarding against,” he said.

“I think there’s a high probability of such an attempt. Whether or not they can pull it off depends whether or not we keep in place policies that have allowed us to defeat all further attempts, since 9/11, to launch mass-casualty attacks against the United States.”

If Cheney’s language was dramatic, the setting for the comments was almost bizarrely pedestrian. His office is in a non-descript suburban office building in McLean, Va., in a suite that could just as easily house a dental clinic. The office is across the hall from a quick-copy store. The door is marked by nothing except a paper sign, held up by tape, saying the unit is occupied by the General Services Administration.

At several points, Cheney resisted singling out Obama personally for criticism, at one point saying he wants to give him a break after just two weeks in office. He said he admires Obama’s choice to keep Defense Secretary Robert Gates on the job.

But if he treated Obama gingerly, Cheney was eager to engage in the broader philosophical debate he was accustomed to with Democrats and even many in his own party about the right way to navigate a dangerous planet. He said he fears the people populating Obama’s ranks put too much faith in negotiation, persuasion, and good intentions.

“I think there are some who probably actually believe that if we just go talk nice to these folks, everything’s going to be okay,” he said.

He said his own experience tempers his belief in diplomacy.

“They may be able, in some cases, to make progress diplomatically that we weren’t,” Cheney said. “But, on the other hand, I think they’re likely to find — just as we did — that lots of times the diplomacy doesn’t work. Or diplomacy doesn’t work without there being an implied threat of something more serious if it fails.”

As examples of the dangerous world he sees — and one he predicted Obama and aides would find “sobering” — were Russia’s backsliding into authoritarianism and away from democracy, and the ongoing showdowns over the nuclear intentions of Iran and North Korea.

But it was the choice over Guantanamo that most dominated Cheney’s comments.

“If you release the hard-core Al Qaeda terrorists that are held at Guantanamo, I think they go back into the business of trying to kill more Americans and mount further mass-casualty attacks,” he said. “If you turn ’em loose and they go kill more Americans, who’s responsible for that?”

Of one alternative — moving prisoners to the U.S. prisons — Cheney said he has heard from few members of Congress eager for Guantanamo transfers to their home-state prisons, and asked: “Is that really a good idea to take hardened Al Qaeda terrorists who’ve already killed thousands of Americans and put ’em in San Quentin or some other prison facility where they can spread their venom even more widely than it already is?”

While Cheney’s words were dire, his own mood was relaxed, even loquacious. He was not on crutches — much less the wheelchair he rode to Obama’s Inauguration — from an injury while moving a box of books into his new home.

Suddenly a man of leisure, Cheney has a Kindle, Amazon’s wireless reading device, and said he used it recently to read James M. McPherson’s new “Tried by War: Abraham Lincoln as Commander in Chief.” 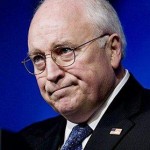