Chevy VOLT – Is this really a “concept” or something truly coming?

One of the hottest and looked-over vehicles at the Detroit Auto Show was the concept car by Chevrolet – the VOLT. Journalists crowded around for interviews, press information, and of course, a zillion photos. With all the hype about better emissions, hybrids, different fuels, and more, the VOLT is a refreshing substitute. It’s a true “plug-it-in”, rechargeable.

The concept VOLT shown at the show was very attractive. It wasn’t a boxy little thing that wouldn’t appeal to anyone. This was a nice looking, four door, small vehicle that is more than just simple transportation. It almost looks like a sports car, but is a very attractive sedan. It has a transparent roof, allowing an abundance of light to the inside. However, the primary thrust of the advance promotion does seem to indicate that the VOLT is aimed at the daily commuter.

In the material distributed to the journalists, GM claims that seventy-eight percent of the people who commute on a daily basis to and from their work only drive 40 miles or less. This information was taken from the October 2003 issue of Omnistats from the United States Department of Transportation. The VOLT is being designed to have a 40 mile range on a single plug-it-in recharging, although the actual range will depend upon road conditions and driver habits.

Again, this is an Electric Vehicle, generally unlike any previous electric vehicle. It has an innovative propulsion system that uses a high Energy battery. The most unique thing I found was that there really is a gasoline engine, although it doesn’t have anything to do with the drive train. If, and that’s a big if, you want to drive the VOLT on a short trip across town that might exceed that 40 mile limit, a 53 kW direct engine-mounted generator kicks in. The Range Extender is called an “on-board power source” and is a 3 cylinder, turbo-charged combustion engine that is supplied with a 12 gallon saddle fuel tank. As long as you put the fuel in the tank, the “on-board power source” keeps charging the batteries, and the vehicle still continues to run on electricity. Okay, so it does have a gasoline operated generator that keeps the batteries re-charged after that first 40 miles. The term gasoline is mis-leading because it is configured to run on gasoline, biodiesel, or ethanol.

The Chevy VOLT concept car looks great in design and interior styling, but these items are not the appeal and can be easily changed. Many Americans want to reduce emissions and reduce dependence on petroleum. This unique system does that. It doesn’t eliminate it all together, but certainly for the average daily commuter, the VOLT will be terrific. I, for one, hope it comes to fruition. 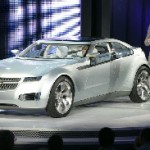