As U.S. interest turns to alternative fuels, Texas emerges as the leader in home-grown energy.

Where Biodiesel Comes From

Nationally, Texas is known as an oil capital. But it’s also an agricultural capital, and that explains- in part- why it emerged this year as the leader in bio-fuels.

In March of this year, Denton, Texas, announced a new methane recovery program at the city landfill. The City of Denton’s original goal, was to prevent methane gas from escaping from the landfill and polluting the air. At a convention, Detroit Edison Electric Company proposed a curious solution: burn the methane to power a process that converts agricultural oils into diesel fuel for the municipal truck fleet. By the time the program was underway, the nation was in another energy crisis, and the fuel savings were very welcome. Because the bio-fuel burns cleaner, the City of Denton also averted the cost of retro-fitting their diesel fleet to meet EPA requirements.

Denton’s partner in the venture, was an entrepreneurial company from California- Biodiesel Industries. LLC. Founded by a petroleum engineer, Biodiesel Industries uses their own proprietary process to convert any number of ‘feedstocks’- new and recycled oils- into high-quality diesel fuel. The ‘feedstock’ agricultural oils were expanded to include white grease, yellow grease, and fish oil in addition to soybean oil, cottonseed oil, and other ‘virgin’ oils.

Until recently, biofuels had been featured as an oddity in the general news media; presented as an off-beat subject. One talk show featured a backyard hobbyist who claimed to be making biodiesel from dead cats. The reality is quite different, but no less interesting.

Although the common raw materials and simple technology make it possible for consumers to make it themselves, the reality of biodiesel is that under the development efforts of companies like Biodiesel Industries, it has become a mainstream, professional, high-quality product that is readying for national distribution- in volume. Here in Texas, Biodiesel Indutries was the first plant to have their product certified under the Low Emissions Diesel program (TXLED)

“We believe we are the first of this kind,” offers Mr Charles Fiedler, Operations Manager for the Denton City biodiesel plant. He goes on to cite a comparative study conducted by the U.S. Department of Energy (USDOE) and the U.S. Department of Agriculture (USDA) on the economics of biofuels vs petroleum: “The results were, that for every unit of energy put in, petroleum processing gave .85 back- 15% less than was put in. For every unit put into Ethanol; 1.8 came back. But for every unit put into biodiesel production, 3 units were returned.”

Mr Fiedler; “Most existing plants in the Midwest were specifically designed to handle nothing but soybean oil. Most of the facilities that are being proposed going forward, will be like us- feedstock neutral- meaning that they can use many different raw materials.”

Willie Nelson has allied his celebrity to the promotion of the agriculturally-based, renewable fuel, by introducing his own brand: Bio Willie. It is currently produced at the Denton plant.

Retail distribution of Bio Willie began in October of 2004 at Carl’s Corner Truckstop, where I-45E and I-35W intersect. By August of this year, the first national retailer- Love’s Truckstops- had installed biodiesel in half of their fuelling lanes at the Midlothian location, the corner of highways 287 and 67. Both are immediately south of the Dallas/Fort Worth Metroplex. With 170 locations in 26 states, this makes Love’s the biggest installation of any of the new alternative fuels. The flashpoint for awareness of biodiesel, may have been the high-profile appearances of Willie Nelson at this year’s 4th of July weekend concerts at Carl’s Corner and Fort Worth. There are now two retail outlets North of Fort Worth, and one North of Dallas. Mr. Fiedler hopes to have a public pump in Denton by the end of the year.

Diesel engines were intended to run on vegetable oils when they were first developed in the early 1900’s. Fossil fuels became cheaper right at that time, because electricity had eliminated the need for petroleum in lighting.

The advantage of biodiesel over other alternative engines and fuels, is that no alteration or special engineering of the vehicle is necessary. The most common diesels owned by consumers in Texas, are Ford, Chevrolet/GMC and Dodge pickup trucks. biodiesel fuels can be put in these vehicles today, at retail locations around the Metroplex. Commercial fleets report better fuel economy, more power, lower engine temperatures, and lower emissions. And better smell. El Lider USA, the leading independent minority newspaper in the Dallas/Fort Worth Metroplex, was the first to evaluate biodiesel in consumer vehicles and report to the public.

Three of the test diesel trucks- the Ford Powerstroke, the Ram Cummins, and the GMC DuraMax- clearly would rather have gone faster than gotten better mileage. Only the Ford was hard to wring more mileage out of by lowering speed. The GMC and Dodge got significantly better mileage dropping to 65 from 70 MPH on the highway. They did even better in boulevard driving- about 45-55 MPH.

The fourth- the Dodge Sprinter van (Mercedes-Benz)- had the greatest reduction in noise level. It used so little fuel during the week, that it was difficult to measure the change in mileage- but it was clearly well over 20 MPG on biodiesel, where it had been approaching 20 MPG in combined City/Highway on mineral diesel.

Previous tests in a Jeep Liberty diesel, indicated that the 4-cylinder went from 24 to 26 MPG on the highway, without dropping speed.

All the vehicles tested were low-mileage, press-fleet vehicles that may not have been completely broken in. They all had less than 6,000 miles. All the diesels evaluated got quieter, and visibly ran cleaner.

Popular diesel cars, include several Volkswagen models- designated as the TDI powertrain; and the new Mercedes-Benz E320 CDI. These cars get significantly better fuel economy than trucks- 40 to 50 MPG is commonly reported. But the trucks outsell the cars in the U.S. The Ford Powerstroke alone, outsold these cars over the last five years by a factor of 8:1.

What’s Next For biodiesel?

With fossil fuels at worldwide record prices and shortages, private motorists and commercial fleets in all industrial nations are motivated to seek alternatives and conserve. The solution in Europe, has been to utilize diesel engines; and by next year, more than half of the new cars sold in Europe will be diesels. This springs from the fact that diesels are 30% more efficient than gasoline engines, and current technology makes them clean, quiet, and more powerful than gasoline engines. They even get better mileage than hybrid powertrains in highway use.

In the U.S., passenger diesels are in limbo because of environmental legislation, which is more restrictive of NOx (oxides of nitrogen) than the European standards. Both mineral diesel and biodiesel will need added exhaust processing- of which urea injection is one example. But biodiesel may meet the standards sooner. “The big buzz on NOx, is that the new USDOE data using a chassis dyno, indicates an NOx reduction for biodiesel,” explains Jake Stewart of Biodiesel Industries.

And biodiesel does offer a host of environmental advantages. “The most significant emissions reduction is in particulates- which is where the toxins are,” explains Mr. Graham Noyes, of World Energy International, the largest U.S. biodiesel marketer, “We also see less benzenes and tolulenes.”

“70% less carcenogenic (cancer causing),” offers Jake Stewart, “The advantages of biodiesel resonate on both sides of the aisle, politically.”

While the tailpipe emissions of CO2 (carbon dioxide) are about the same for both fuels; the regrowing vegetation used in the bio-fuel absorbs CO2. That combined with the elimination of petroleum refining significantly curtails pollution. The overall reduction in ‘greenhouse’ gas- now believed related to global warming- is about 78%.

Down the hall from the factory floor at biodiesel Industries, is a lab bench with a gas chromatograph: a high-tech chemical analysis machine. It’s running a sample marked ‘Willie Nelson’.

“An outside lab in Kansas City also tests our product- along with all the other commercial fuels. Meeting the standards will put money in our process,” concludes Mr. Fiedler; “We’d like to see an ISO standard.”

While biodiesel is a superior fuel in a lot of ways- more powerful, cleaner burning, and greater lubricity- it also has aspects that will continue in scrutiny. A new vehicle will experience no problems, and will probably run better and last longer. But older vehicles may experience problems, because biodiesel is actually more solvent than mineral diesel. It will lift the petroleum residue from the tank and lines.

“You have to be educated about the transition,” explains Mr. Fiedler, “When you start using biodiesel on an older vehicle, you have to change your filters more often, until the sediment is dislodged. And some of the older hoses react badly to the more solvent fuel. You may have to change those, as well. It varies. We’ve found older storage tanks to be particularly troublesome.”

The U.S. auto manufacturers are cautiously optimistic about biodiesel, because they can amortize the costs of diesel production in Europe by adding volume in the U.S. Diesel is far less expensive than hybrid or fuel cell development. And if nothing else, it buys time for the development of more exotic powertrains.

“We initially got some push back from the (auto manufacturers),” explains Charles Fiedler, “Some resisted more than 5% biodiesel content in the blend. It’s inertia on their part. We burn 100% biodiesel in our Isuzu medium truck.

“Caterpillar warrantees use of over 30%; and we know 20% and over works from our own experience. 50% is the standard blend they approve in Germany.”

Warrantee concerns from vehicle manufacturers are based on the possibility of contaminants, lack of quality controls in the manufacture of the fuel, and consistent fuel standards. The use of engineering and process standards from the fossil fuel industry is expected to change that mindset. Mr, Fiedler: “We use ASTM- American Society for Testing and Materials- they set the standards for all retail petroleum products- and they have had a standard for biodiesel since 2002. We also have our own quality control analysis of both raw materials and product.” Because of biodiesel, the vehicles that looked like a wasteful vanity- the heavy pickup trucks- have turned out to be part of a high-technology and environmental strategy. Ironically, the new age future, instead of the caveman past. Diesel cars for the U.S. appear to be waiting in the wings.

DaimlerChrysler announced that they would be bringing 4 new Mercedes consumer diesels to the US, and that the Chrysler 300 and Jeep Grand Cherokee could also get diesels for 2008. The Jeep Liberty is fuelled with 5% bio-diesel from the factory. Volkswagen is currently working with ADM to set quality standards for biodiesel fuels. There is at least one manufacturer program to introduce a diesel hybrid.

“By the end of next year, our industry will have the capability to produce 100 million gallons,” Mr Fiedler says. “Eventually, up to 25% of all diesel fuel could be biodiesel.” 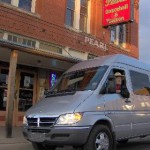 ...Willie at wheel of Sprinter