Exposition Park (1), just south of Downtown LA (off Figueroa Street) has a day’s worth of museums, so you will only need to park once for the day. Start at either end of the park.

The Natural History Museum (2) has more than 33 million specimens and artifacts. The foyer is the dramatic home for the skeletons of a T. rex and a Triceratops. Other halls feature dioramas, gems and minerals, and bugs. Kids will love the museum’s Pavilion of Wings where, for the seventh summer in a row, visitors can walk among giant swallowtail, monarch and other butterflies. Sometimes they even land on your shoulder. (Hint: They seem to like bright colors.) Open daily.

The California Science Center (3) is known for intriguing hands-on exhibits about everything from seeing how a periscope works to searching for camouflaged tree frogs. In the air and aircraft galleries, kids will find a Wright glider, an A-12 Blackbird (made mostly of titanium), a Bell helicopter and a Tigershark fighter jet. Open daily. Admission is free. There’s a small fast-food court inside for a quick lunch. An IMAX theater is also part of the complex; the theater often sells out, so it’s best to buy tickets ahead online.

You can end the day with dinner at the Original Pantry Bakery (5), another LA classic. This diner-style place often has a line out the door but it moves fairly fast. Open 24 hours, daily.

If the kids are begging for adventure, head to Universal Studios Hollywood (6), the land of thrill rides, spectacular shows and endless entertainment options. Take the studio tour and get a behind-the-scenes glimpse of sets from hit movies such as War of the Worlds and King Kong, as well as the television shows Desperate Housewives and CSI: Crime Scene Investigation. The kids will love Shrek 4-D™ and face-to-face encounters with television favorites SpongeBob SquarePants, Scooby-Doo and more.

Or, if you have teenagers, consider a stroll through the picturesque and historic USC campus, where many movies have been filmed. USC is next to the park, to the north.

Come to LA at the right time of year, and it is possible to surf in the morning and snowboard in the afternoon. More realistically, most of the year gives easy access to mountain hiking and beach swimming all in one easy day.

Twenty-five miles northwest from Downtown LA in Calabasas is Malibu Creek State Park (1). Within this 4,000-acre park are hiking trails fit for families and high-adventurers alike. The park also has its fair share of Hollywood movie and TV locations.

For the rugged hiker willing scramble over rocks, dip into the creek and experience beautiful views, Rock Pool (2) is a must. Hikers can easily spend half a day going only a half-mile navigating over rocks and exploring small caves while feeling as if they’ve traveled for miles. On the way to Rock Pool, casual hikers can walk past the Planet of the Apes Wall (3) up to the more rigorous rock-climbing route before turning back to Crags Road, which leads to other trailheads and the former M*A*S*H set. The Nature Trail near the parking lot has been designed for visitors who are visually impaired.

The park is open from dawn ‘til dusk and costs $8 per car. The visitor center is open only during certain hours on weekends, so make sure to ask for tips at the parking booth before settling. From the park’s entrance on Malibu Canyon Road, drive west (that’s a right turn) into the mountains. This windy scenic road through the Santa Monica Mountains will take you to Pacific Coast Highway (commonly referred to as “PCH”).

Once at the ocean and on PCH, head north (right) toward Zuma Beach (4) for more rugged beach land and fewer crowds. Or, turn left for the classic beaches of LA: Malibu for sunning and swimming, Santa Monica for bicycle rentals and shopping and Venice for people watching and atmosphere.

Food is abundant along PCH from beachside sit-down restaurants in Malibu to pizza and gelato stands in Venice. Street parking is at a premium in all these areas, but there are plenty of public parking lots that dot the route along the coast ($5-$12). In Santa Monica, renting a bike or inline skates can take you down the 19-mile bicycle path into LA’s South Bay cities of Manhattan Beach and Hermosa Beach, among others. You can use the Go Los Angeles Card at Spokes N Stuff Rentals (5).

Up and down the coast you’ll find activities from professional volleyball (Manhattan Beach (6)) to listening to drum circles (Venice Beach (7)). Depending on the day, the waves might be big or small, but there are usually waves strong enough for at least boogie boarding or body surfing.

For those who want to say they surfed and snowboarded in one day, start at the beach with surf lessons or rentals in the morning and take a drive to Big Bear (8) a few hours east to snowboard into the night. 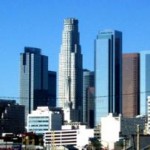