Construction employment grew in 275, or 76 percent, out of 358 metro areas between January 2018 and January 2019, declined in 39 (11 percent) and was unchanged in 44, according to a new analysis of federal employment data released today by the Associated General Contractors of America. Association officials said demand for construction in most parts of the country appears to be outstripping the supply of qualified workers to hire.
“While construction hiring remained very widespread through January, industry employment gains nationally slowed in February—possibly an indication that the pool of qualified workers has dried up in many markets,” said Ken Simonson, the association’s chief economist. “It will be hard to match this level of employment gains when the unemployment rate is setting new lows in much of the nation and job openings in construction are at all-time highs.”
The Phoenix-Mesa-Scottsdale, Ariz. metro area added the most construction jobs during the past year (12,300 jobs, 10 percent). Other metro areas adding a large amount of construction jobs during the past 12 months include Atlanta-Sandy Springs-Roswell, Ga. (9,700 jobs, 8 percent); Houston-The Woodlands-Sugar Land, Texas (8,500 jobs, 4 percent) and Dallas-Plano-Irving, Texas (8,400 jobs, 6 percent). The largest percentage gain occurred in Chico, Calif. (25 percent, 900 jobs), followed by St. Cloud, Minn. (21 percent, 1,100 jobs); Midland, Texas (19 percent, 6,200 jobs) and Cleveland-Elyria, Ohio (18 percent, 5,900 jobs).

Association officials said that the number of unemployed construction workers is at a series low and urged federal officials to boost investments in career and technical education. They warned that firms may not be able to keep pace with growing demand for construction unless more young adults are exposed to, and consider pursuing, high-paying careers in construction.

“Contractors in most parts of the country are having a hard time finding enough qualified workers to keep pace with strong, and growing, demand for construction,” said Stephen E. Sandherr, the association’s chief executive officer. “Expanding the number of high school programs that expose students to the fact construction is a rewarding career path will put more young adults into high-paying construction jobs.” 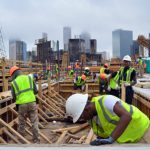