Dallas ISD students made significant gains in eighth-grade reading on the 2013 National Assessment of Educational Progress (NAEP), also known as The Nation’s Report Card. Dallas’ gains outpaced those of the nation’s public schools and Texas when compared to 2011.

Results for the district held steady across the board for fourth-grade reading and math and eighth-grade math, but the sampling of eighth-grade Dallas ISD students who participated in the 2013 Trial Urban District Assessment, or TUDA, reading assessment registered a three-point increase compared to the 2011 results. This is the second time Dallas ISD has participated in TUDA.

“The results released by the NAEP this week are encouraging because they showed increases in areas where we needed to make gains and confirm that the Dallas ISD is making steady progress toward increasing student achievement levels,” said Dallas ISD Superintendent Mike Miles. “This is only the second time that the district has participated in this national assessment, and our fourth- and eighth-grade students showed they can perform at the level of other comparable urban districts.”

The assessment results also revealed that Dallas ISD Hispanic students, English language learners and students eligible to receive free and reduced meals made the most gains in several areas.

“These new results demonstrate that Dallas is making among the strongest reading gains among its urban peers nationally and is beginning to realize the fruits of its performance,” said Michael Casserly, executive director of the Council of the Great City Schools, based in Washington, D.C. “The progress is particularly prominent among Hispanic students and students who are eligible for free and reduced lunch.
“This is particularly important because progress is being demonstrated where it is most needed,” Casserly added. “The results also demonstrate where the district faces its greatest challenges and where priorities for future work rest.”

In addition to showing considerable gains compared to the 2011 assessments, the representative sampling of several student groups equaled or significantly outscored their peers in comparable participating districts or large cities overall in fourth- and eighth-grade math.

The NAEP is known as The Nation’s Report Card because it is the only nationally representative assessment of what U.S. students know and can do in core subjects such as mathematics, reading, science and writing. It reports on student achievement at the national and state levels and 21 selected urban districts. The 21 urban districts that participated in the 2013 TUDA include New York, Los Angeles, Chicago, Houston, and Austin.

NAEP results for Dallas ISD also showed that the representative sampling of the district’s African-American and Hispanic students narrowed the achievement gap in eighth-grade math and reading when compared to the performance of white students statewide.

The gap between Dallas ISD Hispanic eighth-grade students and white students statewide who participated in the NAEP reading assessments narrowed 11 points when compared to 2011 results. Similarly, in reading, the achievement gap between Dallas African-American eighth-graders and white students statewide narrowed by four points compared to 2011 results. Hispanic fourth-graders who participated in the reading assessment also narrowed the gap by four points compared to their white peers statewide.

In math, the achievement gap for eighth-grade Hispanic students narrowed by five points and the one for African Americans narrowed by three points.

Dallas ISD students who qualify for free and reduced price meals also outscored or matched their peers in several districts in math and reading in fourth and eighth grades. Of the 21 participating districts, Dallas ISD has the third or fourth highest percentage of students who are eligible to receive free and reduced price meals, depending on the assessment sampling.

NAEP results showed a slight decrease that may not be statistically significant for white and African-American students who took the eighth-grade math assessments when compared to 2011 results. White students also registered a loss of six points in fourth-grade reading when comparing the current results with 2011. African-American students registered a three-point decline in fourth-grade reading when compared to their performance in 2011.

“While the results of the NAEP also revealed that there are definitely areas for improvement, Dallas ISD teachers deserve recognition,” Miles said. “The effective teaching that is taking place in classrooms and the renewed focus on instruction are yielding positive results. We will continue to study these and other assessment results to implement reforms that will increase achievement levels for all our students.” 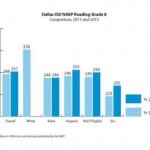