Economic indicators up more than expected in June . . . The group also said acti-vity in the six-month period through June rose 2 percent, with an annual growth rate of 4.1 percent.

It was the third straight monthly increase for the New York-based Confe-rence Board’s index of leading economic indicators, and another sign pointing toward the recession ending later this year.

The index rose 0.7 percent last month. Wall Street analysts polled by Thomson Reuters expected a gain of 0.4 percent. May’s reading was revised up to a gain of 1.3 percent from 1.2 percent, while April was scaled back to 1 percent growth from 1.1 percent.

The group also said acti-vity in the six-month period through June rose 2 percent, with an annual growth rate of 4.1 percent. That’s the strongest rate since the first quarter of 2006.

The index is meant to project economic activi-ty in the next three to six months.

If these conditions continue, “expect a slow recovery this autumn,” said Conference Board economist Ken Goldstein.

“We’re now getting data which points to stabilization,” said Josh Shapiro, chief U.S. economist at research firm MFR Inc. “The overall signal they’re sending is the slide in economic activity is poised to end. The jury is still very much out in terms of what happens after that.”

Many analysts expect modest economic growth in the fourth quarter after the gross domestic product posted the worst six-month performance in about 50 years at the end of 2008 and beginning of this year.

Stocks rose on Wall Street after the better-than-expected index reading and on reports that commercial lender CIT Group had reached a deal with bondholders to avoid bankruptcy. The Dow Jones industrial average added about 50 points in afternoon trading, and broader indices also gained.

The biggest gainer was the “interest rate spread.” That’s the difference between yields on 10-year Treasurys and the federal funds rate, at which banks lend to one another, which is at a record low near zero. A big difference between the two is viewed as positive because investors are willing to lend for longer periods.

The slump in housing led the country into the longest recession since World War II. The downturn has pushed the unemployment rate to a 26-year high of 9.5 percent. The Federal Reserve expects joblessness to surpass 10 percent this year and to stay above healthy levels for years.

A survey released Monday showed the number of firms planning layoffs later this year has dipped. Twenty-eight percent of the companies polled by the National Association for Business Economics said they were still considering cutting jobs through attrition or layoffs in the next six months. That’s down from one-third in April and 39 percent in January.

Only 18 percent of employers polled said they expected to start hiring, but that’s the highest level in a year.

The NABE’s survey of 102 forecasters at companies and trade associations was taken June 19 through July 1.

Mass layoffs continue across many sectors, but the pace and depth of job cuts have slowed. 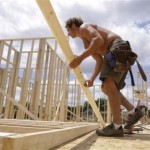