Ethanol is basically grain alcohol. Distilled rather than refined, it is made from agricultural waste when destined for fuel, and blended with 15% gasoline. It gets the name E85 from the 85% of the mix that is ethanol.

This week, while demonstrations are expected at the ExxonMobil headquarters, just a few miles away, Kroger and General Motors are executing the largest roll-out of alternative fuel yet in the U.S. The Dallas-Fort Worth Metroplex launch, is the first installation in a series of 18 filling stations at Kroger grocery stores. It is the first of it’s kind- and most significant- in the U.S.

In spite of the agricultural tie-in, the Kroger chain is motivated by the promotional opportunity. Fuel pumps were added only in the last 5 years, to support ‘one stop shopping’. The E85 availability will be part of the ongoing “Kroger Plus” value program. If you buy $100.00 at the store in a month, you get .10 cents per gallon off on a fill-up.

“Customers are asking ‘When can I get it?’ and ‘What is the price?’” according to Kroger’s Gary Huddleston; “We’re going to price it at less than regular unleaded.”

The Third Leg of The Stool

Ethanol was proved a viable fuel in Brazil in the 1980’s; where it was distilled from waste sugar cane husks. Although the Brazillian energy strategy was successful, it was surpressed by predatory pricing by fossil fuel refiners in the 1990’s.

The reason that true, agricultural alternative “bio-fuels” have not developed more rapidly in the U.S., is because retail filling stations are conrolled by fossil fuel refiners. While ethanol has been successful in the northern midwest agricultural communities, it has not achieved national retail distribution.

Some state govenments have mandated ethanol’s use as an additive to replace the highly toxic MTBE’s in fossil fuel gasoline. Last year, all Texas ethanol production went to California for that reason. Some of the best customers for ethanol are government and private fleets, which do their own fuelling. And ironically, one of the biggest fleet consumers of alternative fuels may be the U.S. military, which has ordered many bases to use alternative fuels in all non-combat vehicles.

Geo-politics surround fossil-fuel wealth and control. Without a national energy policy, U.S. consumers- and businesses- have been at an economic disadvantage.

Many feel that U.S. interests in the Iraq War involve Mid-East oil.

It makes sense that a grocery store chain would be the first to initiate distribution. The fuel is, after all, an agricultural product.

Kroger’s supplier is the Abengoa Bioenergy Corporation, headquartered in Seville, Spain. Of the three plants Abengoa operates in the U.S., the one in Colwich, Kansas will supply Kroger’s Texas markets. That E85 is made from Milo, also known as ‘grain sorghum’.

Now growing in use world-wide, ethanol has returned to distribution in Brazil, as world oil prices rose and supplies dwindled beyond control of even the fossil-fuel refiners. Brazil is now almost energy independent. U.S. production is expected to triple in the next 15 years.

In addition to independence from world politics; bio-fuels are renewable, and cleaner burning. The re-growing crops offset the CO2 emissions. And as they achieve volume, their prices will be far lower than fossil fuels.

There are really only two bio-fuels with significant market presence: BioDiesel and E85 ethanol. Methanol is made from fossil fuel, as are CNG and LPG. Hybrids are a mechanical solution to higher efficiency, rather than a change in fuel. The next environmental step up for hybrids will be to move to an alternative fuel.

Last Fall, almost a year after Carl Cornelius introduced BioDiesel in his Carl’s Corner Truckstop near Fort Worth; CBS ‘Sunday Morning’ reported on the emerging bio-energy fuel. By then, the first brand- ‘Bio Willie’- was successfully established by the legendary Country Western artist, Willie Nelson.

Also at that time, the largest bio-fuel installation of any kind in the U.S., was installed at the Love’s Truckstop at the intersection of highways 287 and 67, south of the Dallas-Fort Worth Metroplex. There are now more than 5 other BioDiesel retail outlets, and 3 BioDiesel manufacturing plants in the area.

BioDiesel is a ‘drop-in’ fuel. Other than changing filters and lines on an older, higher-mileage vehicle; no adaptation is needed to start using BioDiesel. But BioDiesel has vicosity problems around the freezing point, so ethanol will probably remain popular in nothern markets, where it is established.

To date; ethanol has been available mainly in the northern Midwest. A vehicle has to be manufactured with about $18.00 in upgrades to enable it to run properly on E85. Most owners are unaware of their capability.

What Should You Expect?

The Auto Age USA auto section of El Lider USA was the first publication to test E85 with a consumer in Texas. He told Auto Age; “I run 70 miles a day, and I put over 130,000 miles on this truck. If anything, it’s smoother. I had the bed fully-loaded, and it was on cruise control at 70MPH. There’s no odor, it runs great. It’s a better option than gasoline.”

Only after he carefully calculated his mileage, did he find it was about 13% lower. This is typical for E85 use.

“Ethanol is a glorious idea,” concluded our consumer. “Ethanol is renewable. It’s a great resource. Plastic parts- things for our lives- are a better use of the fossil-fuel resource: rather than burning it up in cars.” 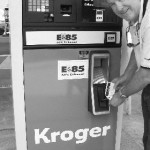 Virgil Musil is testing this E85 pump in preparation for Kroger’s introduction of the bio-fuel, which begins Wednesday, June 7th. The store is located at 7505 North MacArthur Blvd in Irving; on the west side of the street between 114 and 635.