Men who have type 2 diabetes in addition to obstructive sleep apnea seem to benefit from a regular exercise regimen, a new study has found.
Greater endurance from consistent physical activity can significantly boost survival rates for men with both conditions, researchers found. The findings are significant since the prevalence of sleep apnea, which commonly occurs in people with diabetes and high blood pressure, is on the rise, the study authors noted.
«Recent findings suggest that patients with sleep apnea have an increased risk of dying of any cause compared with individuals without sleep apnea,» study co-author Dr. Skikha Khosla, an endocrinologist at the Washington, D.C. Veterans Affairs Medical Center and George Washington University, said in a news release from the Endocrine Society.
Good exercise capacity has already been linked to a lower risk of death in patients with type 2 diabetes, Khosla added. The new study, slated to be presented Monday at the Endocrine Society’s annual meeting in Boston, found that there is a similar relationship in men who also have obstructive sleep apnea, a disorder that disrupts breathing during sleep.
For the study, researchers analyzed 567 male veterans averaging 62 years of age who completed exercise fitness testing between 1996 and 2010. The men’s fitness levels were based on the number of peak metabolic equivalents (METs) they achieved during a stress test (a test that determines how well the heart handles exertion). Men who earned 5 or fewer METs were classified as low fitness. Those who earned more than 10 METs were considered high fitness, and anyone in between was graded as moderate.
After taking other risk factors into account, such as race, smoking and medication use, the researchers found that the risk of death among the men was 13 percent lower for every 1-MET increase in fitness level. Moreover, men in the low-fitness category had a 75 percent higher risk of death than those considered high fitness.
«Although these data are epidemiologic and our patient population was small, the trend we saw in mortality is impressive,» said Khosla. She added, however, that more studies are needed to confirm the results.
Although people with sleep apnea should strive to get 150 to 200 minutes of physical activity each week, they should talk to their doctor before starting any exercise program and work towards that goal gradually, Khosla advised.
Because this study was presented at a medical meeting, the data and conclusions should be viewed as preliminary until published in a peer-reviewed journal.

Toning Exercises For Men
Toning exercises for men are a bit different than those for women. Men wish to target different areas of their body when they tone muscles. Some parts that men choose to begin with are their abs, chest, and arms. Men want to have an athletic look, look toned, without getting bulk. There are a few popular and effective exercises for men to tone muscle.
The best and most popular exercises for men to tone their arms with are pushups. Men can alternate between arms when doing pushups if they choose to, only they will use one arm to do a pushup instead of using two arms. Do a few with one arm and then do a few more with the other arm. To even it out, do some pushups with both arms, too. This has always been a great way to tone the arms.
Men love to be able to have a variety of ways to workout. Men enjoy going to the gym to exercise and they staying at home to exercise. If there is not any fitness equipment available at home, there are still some ways to help tone the arms. Remember the movie, “Rocky”? Rocky used logs to tone his arms for his boxing matches. Of course, a person does not have to use logs to accomplish this, but the idea is that there are things that can be found at home to use for weights.

Ultimately, there are some inexpensive weights at many stores that can be purchased, if someone prefers to have a more professional approach to their workout. There is not much weight needed when starting an exercise routine. A couple of hammers will work just fine to do some toning exercises for arms.
Some men love to do chin ups. This can be done right at home, with any door frame or other part of the arm that is good and strong. This is the same as doing pushups, only it is done from a standing position, and going up and down instead of being on the floor. Most men will lift their body up till their chin can touch the part where they are gripping on with their hands.
A wonderful and fun way to tone the arms is to jump rope. This will help tone the arm muscles and offer a great cardiovascular workout.

Men should follow an exact schedule for their workout plan, and they should follow a good nutritional diet. This diet should involve a good source of protein and carbohydrates. As with any diet, carbohydrates are important, but these need to be taken in moderation. Too many carbohydrates can cause weight gain and the toning of the arms will not be as effective as it should be. Carbohydrates and protein offer great nutrition and great energy. Avoid fatty foods, too, as high cholesterol foods will only counteract the process one is trying to achieve.
Men should try to eat about 30-35 grams of carbohydrates for a snack and about 55-60 grams of carbohydrates per meal. This may not seem like a lot, but there are other things that can be added to the meal to help fill someone up, such as salads with low fat dressing. Foods that contain high fat content are steak, hot dogs, bologna and other foods in this category. Bologna is one of those foods that take forever to digest, just like donuts do. It can take up to 7 hours for a donut to digest, so imagine just what is in this food. If someone eats too many carbohydrates in a meal, too, they may not have good energy to work out.
Overeating can cause loss of energy, as it can cause many other health issues. Toning exercises for men are a wonderful thing to begin, but if they are not followed by a good schedule and proper nutritional diet, it will not benefit them. Maintaining the muscle tone is just as important as getting good muscle tone. If some watches how they exercise and how they eat, they will be able to keep the tone they have achieved a lot easier.

Another part of the toning exercises for men is working on the abs. The most popular exercises for toning the abs are pushups and crunches. Crunches work a lot better for this, as the half sit ups done work harder on the muscles. This should be done on a well padded exercise mat so that the back stays supported. 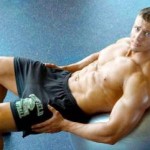