When Lamborghini’s next-generation Gallardo LP 560-4 dropped earlier this year, the sleek two-seater impressed: it wore sharper clothes inherited from the seven-figure Reventon, produced 40 hp more, and shed a few pounds. Even its E-gear transmission got 40 percent quicker in “Corsa” mode, making it a more serious contender in the supercar world.

So removing the top on the newest Gallardo is the next logical step in the evolution of the LP 560-4. With slightly taller shoulders in order to accommodate the soft top, the Spyder’s fabric roof (available in black, blue, grey or beige) is operated by two console-mounted switches. The car’s sleek silhouette is well-preserved when the top is in place, and it takes 20 seconds for the hydraulic pump, six hydraulic cylinders, electric motor and two electric actuators to let the sunshine in (not to mention the glorious roar of the 5.2 liter V10). The top-down process requires the rear windscreen to slide downward while four hydraulic cylinders lift the carbon-fiber composite engine cover clear so the top can stow just ahead of the engine compartment. When you’re driving al fresco, the rear windscreen can be lowered or lifted and used as a wind deflector.

The ground-up mods which accommodate the soft top include recalibrated spring and shock rates for more stiffness, and the incorporation of new rubber-metal bearings. A track rod has been added to the rear axle, and Lamborghini claims that the slightly heavier Spyder has the same handling characteristics as its closed coupe stablemate (though it’s 44 pounds lighter than its ragtop predecessor). The aerodynamic underbody aids in structural rigidity, and the aluminum space-frame chassis has also been reinforced to counteract the lack of a fixed roof. Zero to 60 mph comes in 4 seconds flat, a few tenths slower than the coupe, and top speed is claimed at 201 mph, which is 1 mph less than the hardtop.

The usual go-fast goodies like carbon fiber ceramic brakes are available on the ragtop version, but speed savvy drivers should have a certain comfort knowing that the Spyder has two spring-loaded rollover bars behind the seats, which can deploy in 250 milliseconds, activating the seat belt tensioners in the process. 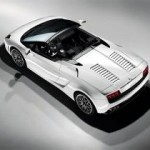 Anterior: AUTOMOTIVE INDUSTRY: Auto bailout could be a Pandora’s Box
Siguiente: TAKE CHARGE OF YOUR CAR: Simple Tips to Help Women Save Money on Their Car Care