NASHVILLE, Tennessee – Tornadoes and thunderstorms shattered parts of the U.S. South on Tuesday and Wednesday, killing at least 52 people and injuring more than 150 in the deadliest such onslaught in nine years. The storms crumpled trucks on highways like toys and trapped and killed people in splintered houses, factories and shops.

At Vanderbilt Hospital in Nashville, Ferina Ferrington told a TV reporter: “My husband and I got into the bathtub with our little girl. I remember flying through the air. It was very scary. Then it was real quiet and we saw our house was gone. Our baby was unhurt.”

Hardest hit were Tennessee — where 28 died — Arkansas, Kentucky, Mississippi and Alabama, with unconfirmed reports of 69 tornadoes swirling across these states and northward into Indiana, according to the National Storm Prediction Center in Norman, Oklahoma.

The death toll rivaled that of the last large deadly series of tornadoes in May 1999 in Oklahoma, Texas and other states, when about 50 people were killed, the center said. Tornadoes typically kill about 70 people in the United States each year.

The weather service and state officials said that in addition to the 28 killed in Tennessee, there were 13 dead in Arkansas, seven in Kentucky and four in Alabama. Injuries were widespread, with 149 people hurt in Tennessee alone. “We know of eight dead and are still looking,” said Shelvy Linville, mayor of Lafayette, Tennessee. “There’s a lot of devastation.”

A tornado struck the Columbia Gulf Transmission company in Hartsville, Tennessee, and set off a natural gas fire that lit up the early morning sky, officials said. Kentucky Gov. Steve Beshear described to CNN a trail of devastation in his state seen from the air.

“In the path of it there is nothing left and on either side of it things are standing just like nothing has happened. It’s an amazing picture to see.”

Inspection of the damage began by mid-morning Wednesday, with the last tornado reported at about 6:25 a.m. CST (1225 GMT) in Jackson County in northeastern Alabama, the weather service said. Forecasters were still concerned about potential tornado activity in Georgia in the afternoon.

In Alabama, Tina Johnson, 41, of Pinhook, said she watched from her house as a tornado tore apart her barn.

“The lightning and rain started back up suddenly and then we could see the funnel cloud through the lightning,” she said. “The preacher’s brick house across the street was destroyed and a mobile home nearby was nothing but a few pieces of tin.”

Kentucky National Guard spokesman David Altom said about 50 soldiers were deployed and others put on stand-by. “The mission right now is to protect the damaged homes from looting,” he said.

Two states hit by the tornadoes, Arkansas and Tennessee, were among the 24 “Super Tuesday” states that held nominating contests before November’s presidential election. Several candidates expressed condolences to victims as they addressed supporters.

The White House said President George W. Bush had called the governors of the affected states offering them consolation and support.

“It’s a pretty rough night in the scope of it. I don’t know if I can remember when we’ve had as many (tornado) warnings and touchdowns,” Arkansas Gov. Mike Beebe said by telephone.

Mississippi reported no deaths but about 11 injuries after two tornadoes ripped across an industrial park, seriously damaging a Caterpillar factory, and farm communities north of the University of Mississippi campus in Oxford.

The Jackson Sun newspaper in Tennessee reported a nursing home was seriously damaged but the 114 residents were evacuated safely. A college in Jackson also was damaged, briefly trapping some students in dormitories. 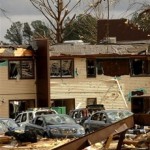