Ford Motor Company is making it a tradition.

FORT WORTH, Texas – In winning its third consecutive Truck of Texas award from the Texas Auto Writers, Ford Motor Company is making it a tradition. Conversely, Lexus – in winning its first SUV of Texas trophy with its hybrid-powered Lexus RX 400h – is breaking with tradition. Those were the top awards, determined by a panel of 50-plus automotive journalists, in the 13th annual Texas Truck Rodeo.

Ford Motor Company continued its winning ways, following overall Truck of Texas honors garnered in both 2003 and 2004. This year its Amarillo-edition F-250 took home the trophy by impressing voters with its aggressive visual stance and take-it-to-the-ranch capability. In this category, there are no half measures and, despite heavy duty competition from Dodge, GM, Toyota and Nissan, attending journalists found more of the ‘right stuff’ in the F-250 than any of the other competing vehicles. Ford also won for Best Truck Line of Texas.

In the SUV category, heightened sensitivity to both fuel and emission issues lent Lexus’ RX 400h a dose of timely credibility. Its argument is helped by the combination of refinement and real world capability. For those reasons people generally buy SUVs, the RX 400h is a bona fide homerun. The Lexus was also a winner for Best SUV technology.

In addition to the balloted judging, which determined two overall winners and fourteen category winners, four awards were given based on the judges’ subjective evaluations. Winning the Pickup Design nod was Nissan, for its ultra-competitive Titan. The redesigned Mercedes-Benz ML 500 won the same design recognition in the SUV category. The award for Best Pickup Technology is shared by Dodge’s expansive Ram 2500 Mega Cab and the all-new Honda Ridgeline, an all-together unique take on a mid-sized pickup. Best SUV Technology went, as mentioned, to Lexus.

A list of all categories and their respective winners follows: 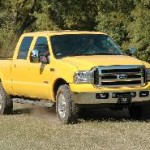