The Ford Motor Company is really, really hoping that you like this car. There are two important reasons for this; first, the design of the ‘06 Fusion is the “new face of Ford,” with show-car influenced styling. Ford is banking on this look’s distinctiveness to carry the brand forward. Second, the Fusion is Ford’s first new entry into the mid-size sedan market since the Taurus. Ford’s done a Goldilocks dance with this important segment of the market for quite some time; the Taurus was too big, the Contour was too small, and it hopes the Fusion will be just right. With those hopes riding on it, the all-new Fusion has some pretty important goals to reach, and in order to do that, it’s got to make you like it.

The good news is that there’s plenty to like about the Fusion. It rides on a slightly stretched version of the chassis that underpins the sporty MAZDA6, it’s available with a torque and quiet V6 engine, and the styling really does look good inside and out. All-wheel drive and high-efficiency hybrid-electric versions are on the way as well.

The chrome and edgy, sharp lines of the Fusion give it an upscale look that fools many passersby into thinking it’s a much more expensive car. The design is inspired by Ford’s 427 show car from 2003, and combines strongly defined hood and tail lines with crisply drawn character lines and a dramatic dip to the front end. The generously applied chrome on the three-bar grille looks best on dark-colored Fusions, and blends nicely with the car’s flat planes so that it doesn’t look “retro.” At the rear, the taillights are triangular and distinctly ringed in chrome. The new face is a good look for Ford, and you can expect to see it throughout the lineup in the future.

There’s some family resemblance to the Five Hundred on the inside that’s not present on the outside, and that’s a good thing; the Five Hundred has a great interior design but a forgettable outside. The Fusion looks good inside and out. Easy-to-read gauges are similar to those found on the F-150, and the deep-dish steering wheel is comfortable whether you’re going fast or slow. On the uplevel SEL model, there’s a choice of wood or elegant black lacquer trim. Ford paid special attention to the rear-seat passenger room as well, going so far as to give its engineers size-14 shoes to ensure easy entry and exit for big-footed passengers.

We test-drove the Fusion around the Hollywood Hills, a mix of suburban and hilly, twisty roads. Uplevel Fusions are powered by Ford’s smooth 3.0 liter V6, which is a just-right engine choice for this family sedan. It’s good for 221 horsepower thanks in part to variable cam timing and electronic throttle control. It’s quiet and refined enough for suburban duty, and packs enough punch that it never feels unhappy even on steep hills. Ford also offers a 160-horsepower 2.3 liter four-cylinder for more economy-minded buyers. Both engines are all-aluminum. A six-speed automatic transmission is standard with the V6; five-speed manuals and automatics will be offered with the four-cylinder engine.

Thanks perhaps to its association with Mazda, Ford’s sedans are becoming notable for good driving dynamics. The short-long arm front suspension is more exotic than the typical MacPherson struts found in most sedans, and helps to make the steering crisper. The multi-link rear is nicely tied down when the going gets twisty. The Fusion doesn’t beg you to come out and play in the same way as a Volkswagen Jetta or even Ford’s own Focus, but enthusiasts who want to push it won’t be disappointed. The Fusion is impressively quiet and refined in the suburbs, but it isn’t afraid of corners either. 16” wheels are standard, with 17” alloys available on the Fusion SEL. Push it a little and the Fusion keeps its line without the nasty understeer offered up by the average Honda or Toyota. The Fusion is more engaging than either of those cars; from a driving-dynamics point of view it’s on par with the Nissan Altima and less exciting than the MAZDA6 or any Volkswagen. Our test car was unusually clumsy around town, however, thanks to a turning circle similar to that of a minivan. Four-wheel disc brakes mean that it stops well, at least. Anti-lock brakes and traction control are options. Additional safety is provided by available side-curtain airbags.

Dynamically, the Fusion is a good car, far more modern than the aging Taurus it replaces and up to par with the best-sellers in the class, the Honda Accord and the Toyota Camry. It doesn’t break any particularly new ground, but it’s solidly above average. Ford’s mass-market pricing sweetens the deal. The Fusion starts at $17,795 for the four-cylinder-equipped S model. That price gets you an MP3-capable sound system and a very fine-looking and driving vehicle. More than one onlooker estimated the chromey Fusion’s base price to be $10,000 higher. Our test car was a well-equipped SEL, with a leather interior and side airbags. It stickered for $25,555, and that ain’t much. Is it good enough to challenge Honda or Toyota? Only time will tell.

The Fact Box: All specs are for the 2006 Ford Fusion 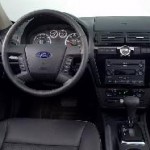