One of the most important news at the Chicago Auto Show was the announcement of the nameplate change in the Ford and Mercury brands. In the Ford brand the 2008 vastly improved and completely redesigned Five Hundred will now be a Taurus and a more sleeker Freestyle will now be the Taurus X a surprising and dynamic CUV, the Mercury Montego will become the solid and very recognizable name of Mercury Sable, upgraded 2008 model versions of all three vehicles go on sale this summer.

Under the new leadership of Alan Mullaly and a refreshed marketing strategy with the rebirth of the Taurus Icon; Ford hopes to increase the sales volume of a very good sedan that is best in class all the way around, this is a smart move to maintain the identity of a vehicle that consumers are comfortable with.

Mark Fields, Ford’s President of The Americas was candid in his address to the Press at the first day of the media event, and humbly accepted that Ford had made a grave mistake in discontinuing thee Taurus and Sable name from the Ford Portfolio, in his own words… “I don’t know what we were thinking” he added. “Taurus and Sable are most recognizable names by consumers than Five Hundred and Montego, The Taurus name has been an icon for Ford’s family sedan for more than two decades, and it’s time to return this powerful name to where it belongs,” we walked a way from a tremendous equity that we had built in over 20 years” By giving these vehicles the names that consumers recognize, at the same time we’re making significant upgrades, we’re confident that even more people are going to be attracted to these great products in the future,” “We designed the perfect family car, then we gave it the perfect name: Taurus! ..Fields added. A day later Jim Press chief of Toyota praised Ford’s bold move in the name change for all three significantly refreshed vehicles models.

The Taurus sedan first arrived in the American landscape in 1985 with a sound and visually stunning design of smooth and sexy curves, a breakthrough that changed the marketplace of those years, thought out the years that followed the midsize sedan improved in performance, power and interior amenities to become America’s best selling family car for five years straight, and won the government’s highest rating for frontal crash tests, by the time the Taurus ended production nearly 7 million cars had been sold, indeed Taurus is an enduring iconic mark that has remained in the memory of millions of fans, a vehicle they called “our everyday hero” these former Taurus owners were left out in the cold without the replacement of the next upgrade, thousand of letters clamoring for the come back of the Taurus name has finally hit a receptive drum.

The new 2008 Taurus has a distinctive Fusion inspired exterior style design with a three bar chrome grille fascia, the body contour sweeps smoothly to envelop two side chrome air vents and wide horizontal tail lamps, and a well structured hood of sharp and definite lines, a new power train with 260 horsepower, and other improvements make the new Taurus faster, more quieter and safer.

The 2008 Taurus delivers a plush and ultra quiet interior. The new year model built with advanced sound technology, the headline and door pillars are filled with expandable foam pellets called Sonorbob, this material absorbs exterior noise and vibration and increases sound-deadening efficiency by 20 percent, the engine and transmission are now mounted in the vehicle with hydraulic mounts to further reduce road vibration, new climate control system enhance the interior quietness by as much as 50 % more than before.

Other upgrades that make this classic sedan a first class car with a more comfortable ride include a more efficient suspension system and a revised rear suspension with new dampers and springs.

The new Taurus is not only able to satisfy the old timers but it also offers a package of must have technology for all ages with features like a fully-integrated audio system for mobile phones, navigation, and digital media called Ford Sync, a development in collaboration with Microsoft with a voice-activated hands-free entertainment in-car communications system.

The new 2008 FORD TAURUS X arrives to the scene with an Edge-inspired exterior styling, it replaces the former Freestyle with numerous improvements and interior comfort amenities, acceleration is 44% better, more efficient utility with power rear lift gate and one touch, flip and fold second and third row seating for cavernous cargo space. Ford predicts that that crossovers will become the largest segment in the U.S. by the end of the decade, the full size X three row CVU clearly strengthens the crossover leadership, and is one of the 12 Ford , Lincoln, and Mercury vehicles equipped with the revolutionary In Sync technology.

Joining the Mercury Stable a vastly improved Montego becomes the new 2008 Sable; Mercury has always been considered a premium brand and more upscale than Ford, the 2008 Sable comes back with extensive design upgrade and is fitted with numerous luxury features, convenience and entertainment services like DVD navigation, radio satellite Sirius and also Ford’s unique in Sync.

The 2008nMercury Montego is equipped with a 3.5 liter V6 and delivers 30% more power with 260 horse power, this powerful engine is mated with an automatic six speed transmission, a better balanced and quiet ride thanks to advance Tract electronic stability and a revised Mac Pherson strut front suspension and the reinstatement of independent coil over rear suspension and a standard all wheel drive system, the new Sable is equipped with all the safety features of the Taurus X and is expected to be a segment leader in safety, capable of achieving five stars ratings.

The Mercury brands of vehicles have successfully secured the following of women. ““Our newest Mercury’s are attracting new customers and doing a great job at appealing to women,” Codina said. The new 2008 Sable is definitely a refined and sophisticated sedan with a great distinctive style. 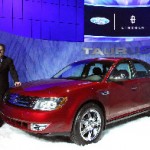