Dallas, TX —The Greater Dallas Hispanic Chamber of Commerce (GDHCC) honored the 2005 «Unidos Award» finalists DART (Public Entity of the Year) and Texas Instruments (Corporate Entity of the Year) this past Friday, January 20th, 2006, during the annual Partners Appreciation Breakfast, which was held at the Fairmont Hotel Regency Ballroom (1717 North Akard, Dallas, Texas 75201). The breakfast, which is underwritten by the Chambers 2006 Entrepreneurial Investors, is to recognize the 2005 GDHCC Corporate Partners.

«These awards acknowledge the commitment that these corporations have to our Hispanic community,» said GDHCC Chairman Carol Martinez.

«These companies go above and beyond every year to make sure that our members are aware of procurement opportunities and chances for advancement.» José M. Gutiérrez, President & CEO of AT&T Southwest delivered the keynote address for the evening. In addition to honoring the Unidos Award recipients, the Chamber will present seven Chairman’s Awards.

Recipients for this year include:

The purpose of the «Partners Appreciation Breakfast» is to thank the Chambers corporate partners formally and to demonstrate to them that the Chamber is and effective stewards of their contributions by providing them with an overview of the Chamber’s progress and accomplishments. The event also function as a public method to recognize and award the «Unidos Award» to the Corporation and Public Entity of the Year from among the valued group of Chamber corporate and government partners. 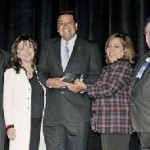