Video game systems are in more homes than ever – and two new consoles, the PlayStation 4 and Xbox One, dot many wish lists. So USA TODAY game gurus Brett Molina and Mike Snider have suggested a dozen titles that will send true video game lovers a-leaping.
KIDS
Disney Infinity (Disney Interactive, for PlayStation 3, Xbox 360, Nintendo Wii, Nintendo Wii U, $74.99 for Starter Pack; $9.99-$34.99 for additional figures, accessories; ages 10-up) The digital wonderland combines collectible figurines from The Incredibles, Cars and other Disney franchises with an action-packed video game. Players use a special portal to transport the figures into the game for themed adventures or they can build their own worlds in the massive Toy Box.
Skylanders SWAP Force (Activision, for PlayStation 4, Xbox One, PlayStation 3, Xbox 360, Nintendo Wii, Nintendo Wii U, Nintendo 3DS; $74.99 for Starter Pack; $14.99-$24.99 for additional figures, ages 10-up) The pioneer of the toy/video game hybrid returns with a new selection of action figures featuring detachable upper and lower parts that players mix and match to create up to 256 combinations. Figures purchased for earlier Skylanders titles will work here, too.
Super Mario 3D World (Nintendo, for Nintendo Wii U; $59.99; all ages) Mario is back with friends Luigi, Princess Peach and Toad, rescuing a group of fairy-like creatures called Sprixies from his archrival Bowser. Players can choose to break blocks and scoop mushrooms on their own, or make their adventure social by playing with as many as three friends.
TWEENS
NBA 2K14 (2K, for PlayStation 4, Xbox One, PlayStation 3, Xbox 360; $59.99; all ages) The premier pro basketball title returns with a focus on the King. LeBron James gets his own game mode where players choose to lead a Miami Heat dynasty or jump to another team. Next-generation versions feature a powerful upgrade in visuals, with hoops stars that closely mirror the appearance of their real-world counterparts.
FIFA 14 (Electronic Arts, for PC, PlayStation 4, Xbox One, PlayStation 3, Xbox 360, $59.99; all ages) Although EA is best known in the U.S. for Madden NFL, this sports franchise might be the better «football» game. This year’s soccer game features more precise player movement, smarter opponents and more realistic ball physics.
LEGO Marvel Superheroes (Warner Bros. Interactive, for PlayStation 4, Xbox One, PlayStation 3, Xbox 360, Nintendo Wii U, PlayStation Vita, Nintendo 3DS; $29.99-$59.99, ages 10-up) The popular video game series based on LEGOs turns its attention to the Marvel Comics universe, featuring countless heroes including Spider-Man, Iron Man and Captain America as they stop a crew of villains from assembling a superweapon.
TEENS
Just Dance 2014 (Ubisoft, for PlayStation 3, Xbox 360, Nintendo Wii, $39.99; PlayStation 4, Xbox One and Wii U, $49.99, ages 10-up) The popular motion-matching dance game – previous iterations have sold 40 million-plus – has current hitmakers such as Katy Perry (I Kissed a Girl and via free download, Roar), Ke$ha (C’mon), will.i.am with Justin Bieber (#ThatPower) and One Direction (Kiss You), as well as classic dance hits from Gloria Gaynor (I Will Survive) and the Village People (Y.M.C.A.) — even a Bob Marley tune (Could You Be Loved).
Forza Motorsport 5 (Microsoft; For Xbox One; $59.99; all ages) This racing game, available only for Microsoft’s new Xbox One video game system, purrs like a well-tuned engine. You can choose from a fleet of cars that ranges from small Mini Coopers to Lamborghinis and drive an international assortment of tracks. And when you are not playing, your cloud-based driving persona will compete in other players’ races, earning you experience points.
Need for Speed: Rivals (Electronic Arts, for PlayStation 3, Xbox 360, PlayStation 4 and Xbox One, $59.99; Windows PCs, $49.99; ages 10-up) Like your auto racing games fast and furious? Rivals pits you as a road racer avoiding the cops or as a high-horsepowered police officer bringing the heat down on illegal racing. And you can take the competition online to compete against others, too.
ADULTS
Assassin’s Creed IV: Black Flag (Ubisoft, for PlayStation 3, Xbox 360, Nintendo Wii U, PlayStation 4, Xbox One, $59.99; Windows PC, $49.99, ages 17-up) The action-adventure series takes to the high seas with players assuming the role of early 18th-century pirate captain Edward Kenway. You earn your ship the Jackdaw, then sail the Caribbean plundering other vessels and building your own pirate fleet. Along the way, Kenway is caught up in an eons-long battle between the Assassins and Templars.
Dead Rising 3 (Capcom/Microsoft; For Xbox One; $59.99; ages 17-up) If that gamer on your list loves The Walking Dead, this new exclusive game for the Xbox One gives them a chance to tackle the zombie apocalypse. This is the third in the game series, but newcomers need not fear the story. There’s zombies to dispatch, and your character Nick can create weapons and customize vehicles to help in that survival quest.
Grand Theft Auto V (Take-Two Interactive, for PlayStation 3 and Xbox 360, $59.99, ages 17-up) Developer Rockstar Games delivers its biggest open-world game ever with a gigantic explorable virtual Los Angeles. Your trio of characters – Michael, Franklin and Trevor – work together planning and pulling off ever-bigger heists. And for the first time, you can tackle the GTA world in a new online mode. Not for kiddies. 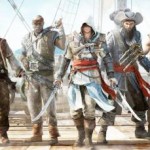