National holiday in the United States commemorating the Pilgrims’ celebration of the harvest reaped by the Plymouth Colony in 1621, after a winter of great starvation and privation. The celebration was probably held in October. The neighboring Wampanoags, who outnumbered the colonists, joined them for three days and contributed food to the celebration. The first proclaimed day of thanksgiving in the colony was not held until 1623 (probably at the end of July), following an improvement in prospects for the still struggling colony, and was a day of prayer, not feasting.

After the American Revolution the first national Thanksgiving Day, proclaimed by President George Washington, was Nov. 26, 1789, and the Episcopal Church began celebrating an annual day of thanksgiving on the first Thursday in November. Some states established an annual Thanksgiving Day, but there was no annual national holiday until President Abraham Lincoln, urged by Sarah J. Hale, proclaimed one in 1863, appointing as the date the last Thursday of November. Although the only known contemporary account of the 1621 Plymouth harvest celebration had been rediscovered in 1841, the national Thanksgiving Day initially was not officially linked to it.

In 1939, 1940, and 1941 President Franklin D. Roosevelt proclaimed Thanksgiving the next-to-last Thursday in November. Conflicts arose between Roosevelt’s proclamation and about half of those of state governors, and in 1941 Congress passed a joint resolution decreeing that Thanksgiving should fall on the fourth Thursday of November. The day is observed by church services and family reunions; the customary turkey dinner is a reminder of the wildfowl served at the Pilgrims’ celebration. Canadians also celebrate a national Thanksgiving Day, on the second Monday in October; prior to 1957 it was on the last Monday of the month.

The Thanksgiving holiday celebrated each November in the United States is known worldwide as an American custom, but its roots extend far back into human history.

According to research conducted by The Center for World Thanksgiving at Thanks-Giving Square, the first Americans observed rituals and ceremonies to express gratitude to a higher power for life itself. A Seneca Indian ritual, for example, states, “Our Creator … Shall continue to dwell above the sky, and this is where those on the earth will end their thanksgiving.” Another quotation attributed to American Indians before Columbus is, “The plant has its nourishment from the earth and its limbs go up this way, in praise of its Maker … like the limbs of a tree.”

According to historical sources, the Pilgrims never held an autumnal Thanksgiving feast. The Pilgrims did have a feast in 1621 near Plymouth, Massachusetts, after their first harvest. This is the feast people often refer to as “The First Thanksgiving.” This feast was never repeated, so it can’t be called the start of a tradition, nor did the colonists or Pilgrims call it a Thanksgiving Feast. In fact, to these devoutly religious people, a day of thanksgiving was a day of prayer and fasting.

Nevertheless, the 1621 feast has become a model for the Thanksgiving celebration in the United States. More than likely, this first harvest feast was eaten outside, based on the fact that the colonists didn’t have a building large enough to accommodate all the people who came. Native Americans definitely were among the invited guests, and it’s possible, even probable, that turkey (roasted but not stuffed) and pumpkin in some form found their way to the table. The feast is described in a firsthand account presumably written by a leader of the colony, Edward Winslow, as it appears in Mourt’s Relation:

“Our harvest being gotten in, our governor sent four men on fowling, that so we might after a special manner rejoice together after we had gathered the fruit of our labors. They four in one day killed as much fowl as, with a little help beside, served the company almost a week. At which time, amongst other recreations, we exercised our arms, many of the Indians coming amongst us, and among the rest their greatest King Massasoit, with some ninety men, whom for three days we entertained and feasted, and they went out and killed five deer, which they brought to the plantation and bestowed on our governor, and upon the captain and others. And although it be not always so plentiful as it was this time with us, yet by the goodness of God, we are so far from want that we often wish you partakers of our plenty.”

From this we know that the feast went on for three days, included 90 “Indians,” as Native Americans were called then, and had plentiful food. In addition to the venison provided by the Native Americans, there was enough wild fowl to supply the village for a week. The fowl included ducks, geese, turkeys and even swans.

New World With Many Cultural Influences

In addition to thanksgiving traditions brought to North America by settlers from many parts of the world, some authorities link the American thanksgiving with the ancient Jewish observance of Sukkot in the fall, which expresses thanks to God for the bounty of the earth. Indeed, all the major world religions—including Hinduism, Buddhism, Judaism, Christianity and Islam—have rituals, observances and liturgies that express thanks and gratitude to a higher power for the gift of life and its wonders. Regardless of the origin of the American Thanksgiving holiday, the following brief timeline shows its development. For a more detailed history and chronology, click here.

1541 During Coronado’s expedition a Eucharistic thanksgiving, with the friendly Teya Indians present, occurred in Palo Duro Canyon in West Texas.

1621 Pilgrims and Native Americans enjoyed a harvest feast in Plymouth, Massachusetts. This feast may have become the model for today’s American celebration.

1630 Settlers and colonists from many continents brought customs of days of prayer and thanksgiving, especially in New England, where the first Thanksgiving of the Massachusetts Bay Colony was observed on July 8, 1630.

1777 The first Thanksgiving of the new United States of America occurred in 1777 when General George Washington and his army, as instructed by the Continental Congress, stopped in bitter weather in the open fields on their way to Valley Forge to mark the occasion.

1789 Washington’s first proclamation after his inauguration as the nation’s first president in 1789 declared November 26, 1789, as a national day of “thanksgiving and prayer.”

1800s The annual presidential thanksgiving proclamations ceased for 45 years in the early 1800s. 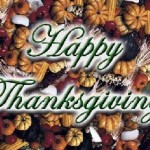