DENVER — Six Hispanic legislators from Texas and more than 30 members of the Lone Star state’s delegation pedaled through the streets of Denver today to emphasize the importance of physical activity in fighting obesity, diabetes and other health conditions afflicting the Hispanic community. In addition to enjoying the fun of bike riding, the Texas delegates also showcased the health and environmental benefits of bicycling and bike sharing.

The ride, called Freewheelin con La Raza, took place on the final day of the Democratic National Convention, site of the country’s biggest bike-sharing program to date: Freewheelin. Bike sharing is an international social movement that makes bikes available throughout cities for short-term use.

Freewheelin, which debuted at the Democratic convention – and moves on to the Republican National Convention next week – is an innovative bike-sharing program developed by Humana Inc. (NYSE: HUM) and cycling advocacy organization Bikes Belong. The program is bringing 1,000 bikes to Denver and Minneapolis-St. Paul for anyone 18 or older to use during the Democratic and Republican Party conventions.

The ride also had another purpose: contribute toward the goal set forth last month by a bi-partisan – or “bike-partisan” – group of Congressional leaders, challenging all Democratic and Republican convention-goers to participate in Freewheelin and collectively complete 10,000 rides and bike 25,000 miles by the conventions’ close. Achieving this goal will help reduce both conventions’ carbon footprints, traffic, parking congestion and transportation costs, not to mention reducing calories.

Bikes are available in Denver for the Democratic convention from Aug. 25-28; and in Minneapolis-St. Paul for the Republican convention from Sept. 1-4. Participants who register in advance via the Freewheelin Web site (www.freewheelinwaytogo.com) will be ready to check out a bike from one of the multiple bike stations throughout the convention cities. Online registration and use of the bikes during the conventions is free, with all related costs paid by Humana and Bikes Belong. Bikes will be available beginning at 7 a.m. each day of the conventions, and don’t have to be returned to a bike station until 7 p.m. each day. The bikes can be returned to any station.

Freewheelin bike stations are set up throughout the cities, near the convention centers and major hotel complexes. Those interested in the program, but unable to register online, can also register in person at any Freewheelin station. Greeters are on site at each bike station to assist with registration and route planning, and safety specialists will be available to answer questions and address concerns.

Freewheelin is one of a number of initiatives that Humana is developing to encourage people to have fun and get active, including everything from rewards for walking to video games that promote exercise.

Over its 47-year history, Humana has consistently seized opportunities to meet changing customer needs. Today, the company is a leader in consumer engagement, providing guidance that leads to lower costs and a better health plan experience throughout its diversified customer portfolio.

More information regarding Humana is available to investors via the Investor Relations page of the company’s Web site at http://www.humana.com. 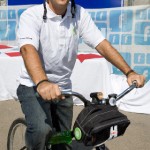