HOLLISTER, CA – 23JULY09 – The Campo Rojo (Red Camp) is a labor camp for farmworkers, operated by labor contractor John Hernandez. Most of the workers living in this camp are Mixtec, Triqui or other indigenous migrants from southern Mexico.

Alberto Chavez eats a paleta as he relaxes with a friend in the camp after work. Chavez, a Mixtec migrant from Guerrero, shares a room with five other men. A man and woman from Oaxaca relax in their room, which they share with six other people. Margarito Mendoza, a Mixtec migrant from Guadalupe Mano de Leon, Tlacoachistlahuaca, Guerrero, practices on his electric piano while a coworker sleeps in his bunk. Four other men sleep in their room. The camp has a communal bathroom, where workers clean up after work.

The Campo Quintero (Quintero Camp) is a labor camp for farmworkers, operated by labor contractor Hope Quintero. Most of the workers living in this camp are also Mixtec, Triqui or other indigenous migrants from southern Mexico, although workers from other parts of Mexico also live here.

The signs at the camp entrance say: “Drunks and scandalous people will absolutely not be admitted. Those who disobey will be thrown out of the camp.” and “It is strictly prohibited to rob or take things without permission.” Ramon Valadez Tadeo, a migrant from Guadalajara, shares his room with four other men, as does Jesus Ramon from Tijuana.

Labor camps are gradually disappearing in California. Up through the 1960s and 70s, growers maintained camps where migrant workers could live while they were employed at the ranch. In some labor camps, single workers without families lived year around. This was especially true for Filipinos, who came from the islands as single men, and who were forbidden by antimiscegenation laws from marrying women of other nationalities and starting families.

When the United Farm Workers grew strong in the 1970s and early 1980s, growers began tearing down the camps, disclaiming any responsibility for housing for the farm workers they employed. As a result, today many California farm workers sleep in cars, crowded in motels or apartments, or even under the trees.

The camps in Hollister give an idea of what the camp conditions for farm workers were like forty and more years ago. They often provide poor living conditions at a high price to workers, who are obligated to work for the labor contractor or grower operating the camp. But the alternative to living in the camp is often worse, due to the extreme lack of adequate farm worker housing in California.

Thanks to Adam Sanders for help in this photodocumentation. 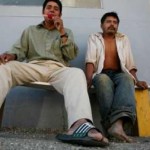 ...Alberto Chavez eats a paleta as he relaxes with a friend in the camp after work.