Hydraulic hybrid technology has so far been aimed at delivery and refuse trucks, but it could make sense for smaller vehicles too. So why aren¢®¯t automotive engineers paying more attention 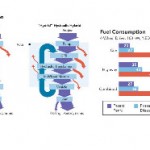