SEATTLE – The president of the Seattle Police Officers Guild says an officer was justified in punching a young woman who shoved him in a dispute over jaywalking.
Rich O’Neil told KCPQ-TV that punching her in the face was an appropriate use of force as the officer struggled with two women and a crowd formed. O’Neil says it’s wrong to call the punch police brutality or racist.
Cell phone video shows Officer Ian P. Walsh trying to control two women Monday and punching a 17-year-old in the face.
Acting deputy police chief Nick Metz has said the women bear much of the responsibility for resisting arrest.
Seattle Urban League CEO James Kelly says the punch was an overreaction that brought to mind a video taken April 17 of two Seattle officers kicking a Hispanic suspect.
Police are conducting an internal investigation.

Confronted by another incident caught on videotape, Seattle police have ordered a sweeping review into a jaywalking stop in which an officer punched a 17-year-old girl in the face after she shoved him.
Interim Police Chief John Diaz ordered the review of the department’s training procedures after a videotape of the incident was repeatedly broadcast on Seattle television stations and media websites.
On the video, Officer Ian P. Walsh is seen punching the girl in the face after she tries to intervene in the arrest of a 19-year-old friend near Franklin High School on Monday afternoon. Police arrested the girl, Angel L. Rosenthal, and her friend, Marilyn Ellen Levias, both of whom have criminal records.
The department’s response to the incident in Rainier Valley came as Mayor Mike McGinn is nearing a decision on a new permanent chief: either Diaz or East Palo Alto, Calif., Police Chief Ron Davis.
It also comes as the department is conducting a criminal investigation into the actions of two other officers who were caught on videotape April 17 kicking a prone Latino man, with one using ethnically inflammatory language.
Acting Deputy Chief Nick Metz, speaking at a hastily called news conference Tuesday morning, expressed concerns about Walsh’s conduct, saying the department was «withholding judgment» pending a separate internal investigation into the officer’s action by the department’s civilian-led Office of Professional Accountability.
His comments represented a stark reversal of the department’s preliminary statement Monday night, when a spokesman said Walsh had acted appropriately.
Walsh, 39, who joined the department in November 2006, has been temporarily placed in the department’s training unit to allow him to review his tactics, Metz said.
Walsh’s handling of the incident was backed by the head of the Seattle police union, who said the department’s review is necessary but that the officer had been defending himself.
Metz said the review of training procedures is not meant as a criticism of the officer’s actions, but would examine department tactics to see if they could be improved.
He said the review would examine not only the punch, but the entire situation surrounding the jaywalking stop.
Rosenthal and Levias are African American; Walsh is white. 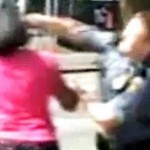 INCREDIBLE!!! The president of the Seattle Police Officers Guild says an officer was justified in punching a young woman who shoved him in a dispute over jaywalking.