Some 1,000 Iranian students created a human chain Tuesday around the Isfahan uranium conversion facility to protest a recent UN report charging that Tehran may be developing nuclear weapons.
The display, which was organized by the Iranian regime, was meant to convince the West that the Iranian people are willing to scarifies themselves in case of an Israeli strike on the country’s nuclear sites.
A week ago, the International Atomic Energy Agency published a grave report on Tehran’s nuclear program, charging that some of Iran’s activities are military in nature. The charges were followed by increasing reports that Israeli officials are seriously considering a military strike on Iran.
The students, who arrived at Isfahan from across Iran, prayed outside the nuclear facility’s main entrance and then proceeded to create a human chain around the site. While at it, they chanted «Death to Israel» and «Death to America.»
During the event, one student leader warned the West against attacking Iran, vowing a devastating response to any strike.
«We, the young revolutionaries of Iran, promise the West and America that should they fire one bullet at Iran, we shall destroy Tel Aviv and its citizens within three days,» Muhammad Jafrinejad said.
Iranian television reported that the students, who held up photos of Iran’s leaders, were treated to a speech by the brother of a nuclear scientist assassinated last year. One student held up a «wanted» sign featuring US President Barack Obama.

Earlier Tuesday, in an apparent attempt to mitigate international pressure, a senior Iranian official said Tehran was willing to share its controversial nuclear technology with neighboring countries, suggesting it could help Turkey build a nuclear power plant.
Referring to Iran’s nuclear technology, the official, Mohammad Javad Larijani, said, «We are quite ready to share it with our neighboring countries.» 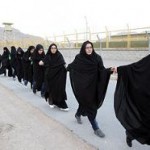 ...Iranian students to the rescue.