The graduation marked the first batch of fully-qualified, Iraqi Army medics who will serve in units throughout western Al Anbar Province.

AL ASAD, Iraq (May 19, 2006) — Since Cpl. Haider Mohammed Jender joined the Iraqi Army a year ago, he has learned how to combat insurgents and provide security to his people.

Now, the 34-year-old Iraqi soldier has completed what he says is the most important training he’ll ever receive – how to save lives.

Jender was one of 20 Iraqi soldiers who recently graduated from an Iraqi Army’s Basic Medical Course here – the first in western Al Anbar Province – five weeks of lectures, written examinations and practical application on what U.S. medical personnel deem as crucial life-saving skills for treating casualties in combat.

“It’s most important how to stop the bleeding, treat for shock and how to treat life-threatening trauma,” said Jender, who will return to his unit in Haditha, Iraq, as a certified medic. “Now, we can save the lives of our brothers, whether they are soldiers or civilians.”

The graduation marked the first batch of fully-qualified, Iraqi Army medics who will serve in units throughout western Al Anbar Province. The plan is to have about 150 trained Iraqi medics by year’s end to serve with Iraqi Army battalions partnered with U.S. military units throughout the province.

The training, usually held at the Iraqi Army training facility just west of Fallujah in Habbaniyah, was another building-block in the Iraqis’ progression towards independent operations, which U.S. military officials have said will happen by year’s end.

While Iraqi Security Forces have made notable progress combating insurgents on their own, they have been criticized in recent months for their continued reliance on U.S. forces for logistical support, to include healthcare on the battlefield.

“This is a big sign of progress,” said U.S. Army Sgt. Jesse G. Sanchez, one of two U.S. Army medics who oversee the Iraqi medic course. “Eventually, they’ll be able to form their own medical platoons, even companies.”

During the graduation, the top Marine commander for western Al Anbar Province told the new Iraqi medics that they “are the foundation” for the Iraqi Army.

“The entire Iraqi Army will be watching to see how you perform,” said Col. W. Blake Crowe, commanding officer of Regimental Combat Team 7. “To be a medic is a higher calling. It’s easier to just be a soldier. You must treat and protect the wounded.”

Sanchez spent five weeks here supervising the course, which is taught by Iraqi Army medics, but says eventually, the Iraqi Army won’t need U.S. supervision for the course. The goal is to wean the Iraqis from Coalition supervision – for Iraqis to teach Iraqis how to save lives in combat, he said.

“In Habbaniyah, we started with a handful of medics,” said Sanchez, a 22-year-old from Montebello, Calif. “We were training them, now they are training themselves and they have physicians and aid stations.”

The training, which consisted of more than 200 hours of classroom time and countless practical application and written exams, is designed to teach the soldiers how to respond both under fire and provide tactical field care, such as applying tourniquets and battle dressings, opening airways to allow breathing, and patient triage.

“When we go on missions, we get attacked by mortars, and people would be missing limbs, have spinal injuries, and bleeding,” said Chief Warrant Officer Mohamed Mtasher Abod, one of two Iraqi Army medics who taught the basic medics course here.

Abod has taught more than 100 Iraqi soldiers to be medics in recent months, and says he is confident those who graduate the course are fully equipped to provide aid and help save lives in combat.

“We have to be able to treat casualties without confusion, without delay,” he said. “If there are a lot of casualties, and people are bleeding, we do what we can.”

U.S. military medical personnel define a mass casualty as any event that results in a number of casualties which could possibly tax a unit’s medical staff and equipment.

The training is considered crucial because a proper first response can mean the difference between life and death in a real mass casualty situation.

In Al Anbar Province, a mass casualty is not unrealistic, quite the opposite, in fact. With the constant possibility troops can run into the threat of small arms fire and improvised explosive devices on Anbar’s dangerous roads, immediate, life-saving medical treatment is a must for the fledgling Iraqi Army.

An IED can lead to multiple casualties, and medics must know how to quickly prioritize the degree of the injuries and treat them accordingly, said U.S. Army Sgt. Kandie L. Mendoza, a U.S. Army medic and supervisor for the Iraqi Army’s Basic Medics Course. Both Mendoza and Sanchez are medical instructors for the Coalition Military Transition Team in Baghdad and have supervised the training of more than 200 Iraqi medics.

“You have to be able to look at the type of wounds and ignore everything else that’s going on (in combat),” said Mendoza, who spent the first two months of her deployment in Iraq as a medic at an aid station with the Ft. Bragg, N.C.-based 602nd Aerial Support Medical Company. “You have to focus on the patient and not everything else.”

Considered by some as the last remaining insurgent stronghold in Iraq, Al Anbar Province is renowned for its improvised explosive device-laden roads, used to target U.S. and Iraqi convoys and personnel.

More than half of all U.S. military casualties in Iraq since 2003 are attributed to IEDs, according to the Iraq Coalition Casualty Count – an organization which tallies U.S. and coalition casualties based off Department of Defense press releases.

In the Haditha region along the Euphrates River in Al Anbar Province, where Jender is stationed with the 2nd Battalion, 2nd Brigade, 7th Iraqi Army Division, IEDs have claimed the lives of half a dozen U.S. troops in the past few months.

A medic’s initial reaction can be crucial to saving lives, especially during mass casualty incidents, when the number and severity of the wounded can greatly outweigh the number of medical personnel and equipment. In these situations, time is of the essence, and a first responder’s immediate actions can mean the difference between life and death, according to Sanchez and Mendoza.

In Al Anbar’s sprawling deserts and open roads ways, where medical facilities may not be within immediate driving distance, proper and immediate medical treatment – the application of tourniquets to stop an arterial bleed, for example – can give troops the time they need to get patients to a medical facility alive.

If a first responder does not respond appropriately and immediately to a combat casualty, the results can be devastating, said Sanchez.

“They could just die,” he said. “Someone may have been able to be saved, but they’re not treated in time.”

During the course, Iraqi soldiers were not only taught, but had to demonstrate, their ability to quickly and effectively react to various scenarios, to include several mock mass casualty drills, similar to those which can be caused by IED and indirect fire attacks.

For three days prior to their graduation, the soldiers spent hours playing out a series of mass casualty type scenarios – several of the soldiers acted as casualties with various wounds, while the rest of the Iraqis had to quickly assess, evacuate and treat the wounded, all under the watchful eyes of the Iraqi instructors and both Mendoza and Sanchez.

“You’re training their medics and helping to build their Army,” said Mendoza. “It’s pretty cool when they do the mass casualty drills and you see they’ve learned the stuff you teach them.”

Now, Mendoza, Sanchez and Abod say the new medics can teach other soldiers the basics of providing immediate, and often life-saving, aid.

“Before, we did not know the more important patients,” said Jender, who says he’s excited to return to his unit and teach other Iraqi soldiers what he’s learned. “Now, we can stop the bleeding and treat for shock and life-threatening trauma.”

“They can use these skills not only here in Army, but also in civilian life,” said Abod. “Now they have the training to help each other.” 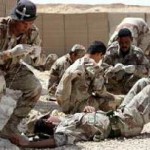