SAN FRANCISCO – Apple Inc. Chief Executive Steve Jobs took the wraps off a super-slim new laptop at Macworld Tuesday, unveiling a personal computer less than an inch (2.5 centimeters) thick that turns on the moment it is opened.

Jobs also confirmed the tech giant’s foray into online movie rentals, revealing an alliance with all six major movie studios to offer films over high-speed Internet connections 30 days after they are released on DVD.

Always a showman, Jobs unwound the string on a standard-sized manila office envelope and slid out the ultra-thin MacBook Air notebook computer to coos and peals of laughter from fans at the conference.

At its beefiest, the new computer is .76 inches (1.9 centimeters) thick; at its thinnest, it’s .16 inches (0.4 centimeters), he said. It comes standard with an 80-gigabyte hard drive, with the option of a 64GB flash-based solid state drive as an upgrade.

Trading in Apple stock was heavy Tuesday, the first day of the Macworld Conference & Expo in San Francisco. It fell 5.52 percent to $168.91 at midday.

The new laptop, which has a 13.3-inch (33-centimeter) screen and full-sized laptop keyboard, will cost $1,799 (euro1,208) when it goes on sale in two weeks, though Apple’s Web site already has been updated to reflect Tuesday’s announcements. The price is competitive with other laptops in its market segment.

The machine helps fortify Apple’s already-sizzling Macintosh product lineup and burnish its polished image as a purveyor of cool.

Apple’s Macintosh business hit record sales of 7 million units in the company’s fiscal 2007, up more than 30 percent from the previous year.

After hovering for years with a 2 percent to 3 percent share of the personal computer market in the United States, Apple’s slice has grown to almost 8 percent, making it the nation’s third-largest PC vendor, according to the latest figures from market researcher Gartner Inc.

The movie-rental announcement capped months of speculation that an Apple movie rental service was in the offing. The service launched Tuesday in the United States and will roll out internationally later this year.

Apple will have more than 1,000 movies for online rental through iTunes by the end of February, with prices of $2.99 for older movies and $3.99 for new releases. Users can watch instantly over a broadband Internet connection, or download and keep the movie for 30 days while having 24 hours to finish the movie once it’s started.

Titles will be available within 30 days of their DVD release.

Jobs also unveiled a string of new features for the iPhone, showing how users of the combination iPod-cell phone-Internet surfing device can now pinpoint their location on Web maps, text-message multiple people at once and customize their home screens.

The crowd applauded when Jobs demonstrated mapping upgrades to the iPhone. Other features rolling out Tuesday included the ability to switch around icons on the iPhones home screen. Users also can create up to nine home screens. 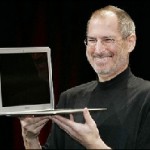