Last-Minute Spring Break Trips, Away From the Party Set

In need of a quick, sunny getaway to plow through the remaining weeks of winter? The options seem limitless — until you realize that your sandy respite will coincide with spring break.

If you’d prefer not to share your vacation with hard-partying college students and families with toddlers in tow, travel agents say it’s essential to choose a destination that these groups don’t visit, or maybe can’t afford.

“Presumably due to the horrifically cold weather, we’ve been getting more requests for last-minute warm weather destinations than in years past,” said Jay Johnson, the president of Coastline Travel Advisors in Garden Grove, Calif., part of the Virtuoso network of agencies. For those striving to avoid the record-breaking temperatures as well as the spring-break fracas, Mr. Johnson and his colleagues suggest the west coast of Costa Rica or the Hawaiian island of Lanai. “Both do not attract boatloads of children during that time of the year,” he said.

The Durban beachfront.Where to Go Now: Near or Far, Head South to Escape the WinterMARCH 2, 2015
Costa Rica, it turns out, is on many agents’ lips. Jeffrey Krudop, manager of Travel Leaders in Fort Wayne, Ind., recommends Guanacaste in northwestern Costa Rica, where visitors can explore volcanoes, hike through a rain forest and go white-water rafting. (March and April tend to be Costa Rica’s drier months, noted Debbie Kirk, the owner of Travel Leaders in Lynnwood, Wash.)

Or consider staying high above the coast — more than 4,000 feet above sea level — in Monteverde. Here you’ll find the Cloud Forest Biological Reserve, thousands of acres with trails and home to hundreds of species of mammals, amphibians, reptiles and birds, including the endangered resplendent quetzal. “Not a beach experience,” said Stephanie Serino, an agent with Tzell Travel in New York, “but it is tropical and the hot springs are sublime.”

Yet the challenge of planning a last-minute beach getaway at this time of year is not merely avoiding college students, Ms. Serino said. It’s also finding a place to stay. Flights to some of the more off-the-beaten path spots such as Grenada and Dominica can be sold out. Even five-star resorts, while costly enough to deter rowdy students, book up early.

“One of my favorite solutions is to send clients to a secluded area on a larger island with lots of air service,” said Ms. Serino. “Eastern Puerto Rico offers an easy, active adventure just a short ride from San Juan, but a world away from the more-Miami-than-Miami scene.” There are plenty of hotels (including the W Retreat & Spa, Vieques Island, for those looking for a little quiet) and things to do including hiking through El Yunque rain forest, kayaking at night in a bioluminescent bay and touring Old San Juan.

Longing for Mexico? Steer clear of Cancún and instead head about an hour and a half away to Tulum. “There are no five-star resorts with ‘kids programs,’ ” said Kim Reicherter-Specht, another agent with Tzell Travel in New York. “The restaurants and bars are peaceful and close early, therefore they don’t encourage spring break binge drinking.” You’ll find plenty of yoga classes and bikini boot camp classes, but as Ms. Reicherter-Specht (who likes the hotels Be Tulum and Coqui Coqui Tulum) said, “there is not much to do in Tulum other than relax on the beach and ride a bicycle.” (If you’re more of a mountain lover, Mr. Krudop of Fort Wayne, recommends the Huatulco area for the vistas and horseback rides.)

Over the last few years Rey Alton, a manager with Travel Leaders in Houston, said he’s been booking more adult-only vacations during spring break and that Tulum is indeed a terrific escape for “grown-ups.” He likes El Dorado Seaside Suites there, an adults-only resort near the Mayan ruins that he said has multiple restaurants and bars, yoga, tennis and a spa.

If the eco-friendly feeling of Tulum appeals, you may also be interested in Roatán, Honduras, which will draw some spring break travelers and scuba divers but, as Donna Scicolone, the owner of Travel Leaders in Solon, Ohio, said, “there are a couple of very cool, eco-resorts that are more removed and earthy. In addition, Roatán is accessible flight-wise, but has the feel of being an adventurous, remote destination.”

For a last-minute domestic getaway, consider Sanibel Island in Florida. Many of the hotels are sold out for spring break, but Kate Rosevear, the president and owner of Travel Leaders in Plymouth, Mich., said some of the smaller, private hotels still have availability.

“One of the best things about Sanibel and neighboring Captiva, apart from the miles of gorgeous beaches and the relatively calm waters of the Gulf of Mexico, is it is just far enough off the beaten path and pricey enough that its appeal is mostly to adults and/or families with young children,” she said in an email while on vacation there. “No ‘out of control’ Spring Breakers here!,” she continued. “One of the other great appeals is that, if it is too late to find reasonable airfares to southwest Florida, you can drive here in a day or two from most of the central, mid and upper Midwest, and Eastern Seaboard states. This is as close as you can come to a ‘Caribbean experience’ without leaving the continental U.S.”
Florida is a quintessential spring break destination, but Gabe Saglie, a senior editor with Travelzoo, the travel deals website, said Sanibel Island, along with Pensacola and Fort Myers “still offer awesome beach experiences with less of a party slant.” In California, another major spring break haven, he suggested forgoing Los Angeles and San Diego for more low-key desert communities such as Rancho Mirage and La Quinta.

In general, you can avoid much of the spring break hubbub by choosing upscale hotel brands such as the Four Seasons, Fairmont and Ritz-Carlton, he said, because they may be tougher for large families or young adults to afford. The same can be said of cruises. More affordable lines such as Carnival will attract families and young adults, he said, so opt for lines such as Oceania, Silversea and Seabourn.

Still, there are plenty of large families who can afford to go anywhere they please. 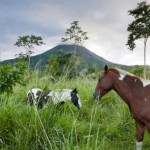