TRIPOLI, Libya – Supporters of Moammar Gadhafi have resumed attacks on rebels who say they control most of the Libyan leader’s sprawling government compound.
Rebel fighters stormed the complex, a symbol of the crumbling regime, in an hours-long battle Tuesday, but the Libyan leader remains in hiding and has vowed to fight «until victory or martyrdom.»
On Wednesday, rebel fighters wandered around the complex, Bab al-Aziziya, when they came under fire. Rebels briefly took cover, some running and others speeding toward the gate in pickup trucks, then returned.
It’s not clear from where the shooting came, but a rebel field commander, Mohammed Amin, says the last holdouts among regime loyalists have entrenched themselves in areas near the compound.

TRIPOLI, Libya — A defiant Moammar Gadhafi vowed Wednesday to fight on «until victory or martyrdom» and called on residents of the Libyan capital and loyal tribesmen across his North African nation to free Tripoli from the «devils and traitors» who have overrun it.
The broadcast came a day after hundreds of Libyan rebels stormed Gadhafi’s Bab al-Aziziya fortress-like compound in the capital but found no sign of the longtime leader. On Monday, the rebels entered Tripoli, pouring into the Mediterranean metropolis of some 2 million people in their thousands in a stunning breakthrough. They claim to control 80 percent of Tripoli.
Tuesday’s ransacking of Bab al-Aziziya, long the nexus of Gadhafi’s power, marked the effective collapse of his 42-year-old regime. But with Gadhafi and his powerful sons still unaccounted for — and gunbattles flaring across the nervous city — the fighters cannot declare victory.
In an address given from an unknown location and broadcast on the Al-Ouroba TV, Gadhafi asked: «Why are you letting them wreak havoc?» The Syria-based satellite station is owned by Iraqi dissident Mishaan Jibouri and has been supporting Gadhafi as well as Syria’s embattled leader Bashar Assad.
Sounding subdued and without his usually fiery rhetoric, Gadhafi said he would fight «the aggression with all strength until either victory or death.»
The channel earlier quoted the Libyan leader as saying he had left the Bab al-Aziziya compound in a «tactical move» after 64 NATO airstrikes reduced it to rubble.
Gadhafi’s chief government spokesman, Moussa Ibrahim, also managed to get word out in a phone interview with the same station, promising «we will be back to take Tripoli back.»
The 69-year-old Libya leader has routinely addressed his supporters from state Libyan television, but the rebels have taken the channel off the air on Tuesday.
In Brussels, a NATO official said warplanes continued to strike overnight at pro-Gadhafi forces near Tripoli.
«We did see remnants of the pro-Gadhafi forces moving heavy equipment and we took action,» the official, who spoke on condition of anonymity due to standing rules. «It shows that we are ever present over Libya, and we will maintain this presence as long as necessary.»
The rebel leadership, based in the eastern city of Benghazi, tried to assert civilian control despite continued uncertainty.
Mahmoud Jibril, deputy chairman of the National Transitional Council, was traveling to France and was to meet with French President Nicolas Sarkozy Wednesday evening, according to Sarkozy’s office. A statement said talks will focus on «the situation in Libya and the international community’s actions to support the political transition to a free and democratic Libya.»
France was the first country to recognize Jibril’s government and has been a driver of NATO’s bombing campaign against Gadhafi’s forces.
The breach of Bab al-Aziziya on Tuesday after hours of fierce fighting with Gadhafi loyalists in the area was a new high for the rebels in what has been an emotional roller coaster since they moved into Tripoli on Sunday night. It began with euphoria and claims that they had taken over most of the city with little resistance. The first night they partied in Green Square, a major symbol of the regime where Gadhafi supporters had held almost nightly rallies throughout the uprising. And it seemed Gadhafi rule was teetering on the brink of collapse.
In the early morning hours of Tuesday, there was a shocking setback. The rebels had claimed that they arrested Gadhafi’s son and heir apparent, Seif al-Islam. It was confirmed by the International Criminal Court in the Netherlands, which has charged him and his father with crimes against humanity.
But inexplicably, Seif al-Islam showed up at the hotel where foreign journalists are staying under the close watch of regime minders in the early morning hours of Tuesday. He giddily took reporters on an eerie drive in the middle of the night to see hundreds of pro-regime gunmen around Bab al-Aziziya and at least a hundred more lined up outside, where guns were being handed out to volunteers.
The rebels waited hours to explain, saying word of his capture had come from secondhand reports from some rebels that were never confirmed and had been leaked to journalists. But in an indication that the announcement of his arrest might have been a ruse calculated to demoralize the regime, Jibril, the deputy chairman of the National Transitional Council, said the reports had some political and military benefits.
«About 30 officers and soldiers surrendered when they heard the news, which helped us take over Bab al-Aziziya swiftly,» he said. «And 11 countries recognized the (rebels’) National Transitional Council after receiving news of his arrest.»
By Tuesday morning, it looked like the capital might descend into bloody urban warfare, with sporadic gunfire in many parts of the city before the rebels move into Bab al-Aziziya.
In other parts of the capital, the rebels said they were also in control of state television. They raised their tricolor flag on the top of the building. Rebels claimed they also control the airport.
Government forces, however, were still holding out at the nearby Rixos hotel where dozens of foreign journalists were being prevented from leaving by armed government enforcers.
In Tripoli’s Green Square, hundreds of rebels celebrated the storming of Bab al-Aziziya, dancing and clapping and waving the red, green and black rebel flag and firing celebratory gunfire in the air. 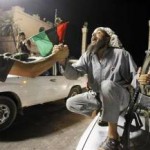