McChrystal out; Petraeus picked for Afghanistan

WASHINGTON – President Barack Obama ousted Gen. Stanley McChrystal as the top U.S. commander in Afghanistan on Wednesday, saying that his scathing published remarks about administration officials undermine civilian control of the military and erode the needed trust on the president’s war team.
Obama named McChrystal’s direct boss — Gen. David Petraeus — to take over the troubled 9-year-old war in Afghanistan. He asked the Senate to confirm Petraeus for the new post «as swiftly as possible.»
The president said he did not make the decision to accept McChrystal’s resignation over any disagreement in policy or «out of any sense of personal insult.» Flanked by Vice President Joe Biden, Defense Secretary Robert Gates and Adm. Mike Mullen, chairman of the Joint Chiefs of Staff, in the Rose Garden, he said: «I believe it is the right decision for our national security.»
Obama hit several gracious notes about McChrystal and his service, saying that he made the decision to sack him «with considerable regret.» And yet, said he said that the job in Afghanistan cannot be done now under McChrystal’s leadership, asserting that the critical remarks from the general and his inner circle in the Rolling Stone magazine article displayed conduct that doesn’t live up to the necessary standards for a command-level officer.
Obama seemed to suggest that McChrystal’s military career is over, including in his praise of the general that the nation should be grateful «for his remarkable career in uniform.»
McChrystal left the White House following his Oval Office call to accounts, and returned to his military quarters at Washington’s Fort McNair. A senior military official said there is no immediate decision about whether he would retire from the Army, which has been his entire career. The official spoke on condition of anonymity because he was not authorized to speak publicly.
With the controversy have the effect of refueling debate over his Afghanistan policy, Obama took pains to emphasize that the strategy was not shifting with McChrystal’s outster.
«This is a change in personnel but it is not a change in policy,» he said.
Indeed, as Obama was speaking, McChrystal released a statement saying that he resigned out of «a desire to see the mission succeed.»
«I strongly support the president’s strategy in Afghanistan,» McChrystal said.
With Washington abuzz, there had been a complete lockdown on information about the morning’s developments until just before Obama spoke.
But by pairing the decision on McChrystal’s departure with the name of his replacement, Obama is seeking to move on as quickly as possible from the firestorm.
Petraeus, who attended a formal Afghanistan war meeting at the White House Wednesday, has been overseeing the wars in both Afghanistan and Iraq as head of U.S. Central Command.
Petraeus is the nation’s best-known military man, having risen to prominence as the commander who turned around the Iraq war in 2007. The Afghanistan job is actually a step down from his current post. 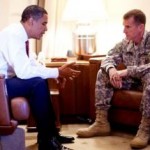 ...In this Jan. 20, 2010 file photo, Gen. Stanley McChrystal, Commander of the International Security Assistance Forces (ISAF) and Commander of UnitedStates Forces in Afghanistan talking with the President Obama. A source tells that President will name Ge