The Xbox 360, Microsoft’s next-generation gaming machine, will be released in the United States and Canada on November 22.

LOS ANGELES/AMSTERDAM – Microsoft Corp. unveiled a partial roster of video games for the launch of its new Xbox 360 game console next month. Microsoft confirmed that exclusive Xbox 360 titles available for the holiday season will include the action-adventure game “Kameo: Elements of Power” and the much-anticipated shooting game “Perfect Dark Zero,” both from Microsoft-owned Rare.

“Project Gotham Racing 3” from independent game studio Blizzard Creations also should be available in time for Christmas, Microsoft said at a press event in Amsterdam.

Microsoft said it will announce more launch titles in the coming weeks.

The Xbox 360, Microsoft’s next-generation gaming machine, will be released in the United States and Canada on November 22. The standard version of the console will sell for $300, while a package with extras, including a hard drive that lets users play some games for the original Xbox, will be $400.

Analysts, who expect Microsoft to ship about 2 million Xbox 360s this year, have been closely watching the lineup of games for the console because cutting-edge games help drive console sales by the hard-core gamers who are first to buy new machines.

Microsoft, the second-largest maker of video game consoles, expects 15 to 20 games on the market for the Xbox 360 launch. Just over a half dozen games were available when the original Xbox hit the market in 2001.

The company said its 2006 Xbox 360 game lineup will include “Crackdown” from Real Time Worlds, whose team includes developers involved in the creation of the blockbuster “Grand Theft Auto” franchise. Other expected 2006 titles include Epic Games Inc.’s “Gears of War,” Silicon Knights’ “Too Human” and “Mass Effect” from BioWare Corp. 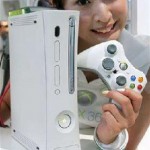 Anterior: In a flash, hard-drive memory fading
Siguiente: What Makes a Good Neighborhood?