More than 180 die in stampede in Cambodian capital 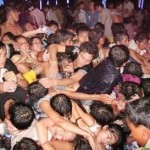 ...People reach for help as they struggle to escape a crush on a bridge in Phnom Penh on November 22. Frantic relatives were scouring makeshift morgues inthe Cambodian capital after almost 380 revellers perished in the stampede.