A Michigan hospital is under fire after a lawsuit claims it fulfilled a father’s request to have no black nurses look after his baby in the neonatal intensive care unit last fall.
A black nurse sued Hurley Medical Center for discrimination and violation of the state civil rights act after the nurse manager reassigned her because of the man’s request for no black nurses, according to the complaint.
The man also pulled up his sleeve to reveal «some type of tattoo which was believed to be a swastika of some kind,» the complaint from nurse Tonya Battle, 49, read. The name of the father who made the request was not included in the court papers.
«Please, No African American Nurses to care for [redacted] Baby per Dad’s request. Thank you,» read a note that was attached to the baby’s clipboard. This followed a staff meeting and a call to the nurse’s home to inform her of the decision, according to the complaint.
A hospital lawyer eventually told the staff this was illegal, but the lawsuit alleges that black nurses were intentionally not assigned to the baby for the remainder of its stay in the hospital over the next month.
The hospital CEO spoke at a news conference after the local chapter of Al Sharpton’s National Action Network held a press conference at the hospital to demand answers.
«The father was informed that his request could not be granted, and as a result, all nurses remained available to care for his baby,» Hurley CEO Melany Gavulic said, according to WJRT. «We appreciate the community’s concern and involvement today, as we publicly clarify the facts of this case. The medical center looks forward to a quick and amicable resolution.»
The nurse had been employed at Hurley for 25 years. She is seeking damages for her distress, harassment and humiliation.
«She’s going to win this lawsuit. The real question is what’s it worth,» local attorney Tom Pabst told. He is not involved in the lawsuit. «If you grant such a request, you’re engaging in unlawful conduct.» 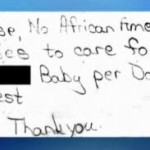 ...This note was taped to a babys clipboard at a Michigan Hospital, a lawsuit alleges.

Anterior: Joe Biden promotes shotguns for self-defense. Is he off base? …e President Joe Biden told a questioner on a Facebook chat that a shotgun works as well as a semi-automatic weapon for self-defense. The comment is not wrong, but it’s curious.
Siguiente: Expect air travel delays if budget cuts hit