Nokia N90 is a Multimedia Workhorse with highest-quality

Cell phone handset makers seem intent on ramming PDA applications, digital still and video capture, music playback, and phone capabilities into one tiny device, often disregarding the disparate form factors these functions require. Nokia, famous (or infamous) for its radical design attempts, has taken a huge step forward in reconciling these form and function conflicts with the N90, due to be available from T-Mobile, Cingular, or both sometime this fall. Instead of making superficial cosmetic compromises, the Nokia N90 morphs into recognizable shapes that enhance its 2-megapixel digital camera, MPEG-4 video, and MP3/AAC audio playback capabilities–not always successfully but compellingly, nonetheless. At more than $900 for an unlocked phone, the Nokia N90 is expensive. At the time of this writing, no carriers had picked it up, but it should be available for less when one does.

NOTE: We tested a preproduction model of the Nokia N90 that didn’t ship with the headset or the special USB connectivity cable; because of this, we were unable to test several of the phone’s capabilities, such as stereo music playback and PictBridge image printing. We will update this review as soon as we get a final unit. 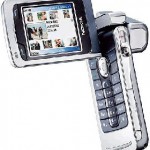