Toyota has equipped the popular Tundra to take any abuse the commercial user can dish out. The Toyota work truck is available in regular-cab Tundra models with V8 engines in either 2WD or 4WD configurations.. Features such as vinyl flooring, roll-up windows and an eight-foot bed make the work truck a rugged companion at a price the commercial user is looking for.

The work truck is powered by an efficient double overhead cam V8 with variable valve timing. An optional towing package is also available, which offers up to a 2,025 pound payload, a 7,100 pound towing capacity, an engine oil cooler, a transmission oil cooler and limited slip differential.

With the highest torque in its class of available fleet work trucks and a five speed automatic transmission, the Tundra possesses the kind of power commercial pickup customers will appreciate. Toyota’s work truck is available at Toyota dealerships in the Gulf States area, including Texas, Oklahoma, Louisiana, Arkansas and Mississippi.

With the opening of Toyota’s new San Antonio truck plant in 2006, the company will nearly triple Tundra production, opening many more opportunities for its trucks. 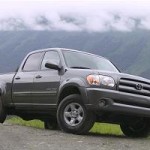