The autopsy of an inmate who died, apparently of a heart attack, during a botched execution was begun on Wednesday in Oklahoma, while Governor Mary Fallin called for an investigation into what went wrong in the death chamber.
Convicted murderer and rapist Clayton Lockett died on Tuesday minutes after a doctor had called a halt to the procedure because of problems with the lethal injection, raising questions about new death penalty cocktails used by Oklahoma and other states.
The autopsy will examine the injection sites on Lockett’s arms and the toxicology of the drugs in his system that were administered in the lethal injection, according to medical examiner’s spokeswoman Amy Elliott said.
Results of the autopsy could come within a day at the earliest, while it may take several months to complete the toxicology reports, she said.
Witnesses to the execution said Lockett clenched his jaw and fists a few minutes after the drugs were injected and appeared to be in pain. Prison officials covered the windows to the death chamber soon after as it became apparent there was trouble.
«We believe that a vein was blown and the drugs weren’t working as they were designed to,» state corrections department spokesman Jerry Massie said.
The governor told a news conference she had called for investigations not only into Lockett’s cause of death, but into whether the Department of Corrections followed execution protocols and even the protocols themselves.
«An independent review of the Department of Corrections procedures would be effective and also appropriate,» Fallin told a news conference.
Fallin also issued a 14-day stay for Charles Warner, who was scheduled to be executed two hours after Lockett on Tuesday night. She said if the review is not completed by the May 13 execution date for Warner, that date may again be changed.
The White House said on Wednesday during a news briefing that the Oklahoma execution fell short of humane standards.
The executions of Lockett and Warner, convicted in separate crimes, had been put on hold for several weeks because of a legal fight over a new lethal injection cocktail, with lawyers arguing the state was withholding crucial information about the drugs to be used.
Attorneys for death row inmates have argued that the drugs used in Oklahoma and other states could cause an unnecessarily painful death, which would amount to cruel and unusual punishment in violation of the U.S. Constitution.
Last week, the state Oklahoma Supreme Court lifted stays of execution for Lockett and Warner, saying the state had provided them with enough information about the lethal drug cocktail to meet constitutional requirements.
Oklahoma had set up a new procedure and cocktail of chemicals earlier this year after it was no longer able to obtain the drugs it had once used for executions.
States have been scrambling to find new suppliers and chemical combinations after drug makers, mostly in Europe, imposed sales bans because they objected to having medications made for other purposes being used in lethal injections.
Oklahoma uses three drugs in its new mixture, which consists of midazolam to bring on unconsciousness, vecuronium bromide to stop respiration and potassium chloride to stop the heart, the Department of Corrections said.
Lockett, 38, was convicted of first-degree murder, rape, kidnapping and robbery in a 1999 crime spree in which he shot teenager Stephanie Nieman and buried her alive in a shallow grave where she eventually died.
Warner, 46, was convicted for the 1997 first-degree rape and murder of 11-month-old Adrianna Waller, who was the daughter of his then-girlfriend, Shonda Waller. 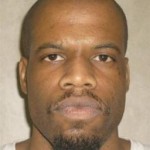 ...Death row inmate Clayton Lockett is seen in a picture from the Oklahoma Department of Corrections dated June 29, 2011.