WASHINGTON – The Supreme Court on Monday blocked a massive sex discrimination lawsuit against Wal-Mart on behalf of female employees in a decision that makes it harder to mount large-scale bias claims against the nation’s biggest companies.
The justices all agreed that the lawsuit against Wal-Mart Stores Inc. could not proceed as a class action in its current form, reversing a decision by the 9th U.S. Circuit Court of Appeals in San Francisco. By a 5-4 vote along ideological lines, the court said there were too many women in too many jobs at Wal-Mart to wrap into one lawsuit.
The lawsuit could have involved up to 1.6 million women, with Wal-Mart facing potentially billions of dollars in damages.
Now, the handful of women who brought the case may pursue their claims on their own, with much less money at stake and less pressure on Wal-Mart to settle. Two of the named plaintiffs, Christine Kwapnoski and Betty Dukes, attended the argument. Kwapnoski is an assistant manager at a Sam’s Club in Concord, Calif. Dukes is a greeter at the Walmart in Pittsburg, Calif.
In a statement, Wal-Mart said, «The court today unanimously rejected class certification and, as the majority made clear, the plaintiffs’ claims were worlds away from showing a companywide discriminatory pay and promotion policy.»
Dukes and Kwapnoski said they were disappointed in the ruling, but vowed to push ahead with their claims. Both women spoke on a conference call with reporters.
«We still are determined to go forward to present our case in court. We believe we will prevail there,» Dukes said.
«All I have to say is when I go back to work tomorrow, I’m going to let them know we are still fighting,» Kwapnoski.
Marcia D. Greenberger, co-president of the National Women’s Law Center, said «the court has told employers that they can rest easy, knowing that the bigger and more powerful they are, the less likely their employees will be able to join together to secure their rights.»
The high court’s majority agreed with Wal-Mart’s argument that being forced to defend the treatment of female employees regardless of the jobs they hold or where they work is unfair.
Justice Antonin Scalia’s opinion for the court’s conservative majority said there need to be common elements tying together «literally millions of employment decisions at once.»
But Scalia said that in the lawsuit against the nation’s largest private employer, «That is entirely absent here.»
Justice Ruth Bader Ginsburg, writing for the court’s four liberal justices, said there was more than enough uniting the claims. «Wal-Mart’s delegation of discretion over pay and promotions is a policy uniform throughout all stores,» Ginsburg said.
Business interests lined up with Wal-Mart while civil rights, women’s and consumer groups have sided with the women plaintiffs.
Both sides have painted the case as extremely consequential. The business community has said that a ruling for the women would lead to a flood of class-action lawsuits based on vague evidence. Supporters of the women feared that a decision in favor of Wal-Mart could remove a valuable weapon for fighting all sorts of discrimination.
Said Greenberger: «The women of Wal-Mart, together with women everywhere, will now face a far steeper road to challenge and correct pay and other forms of discrimination in the workplace.»
The lawsuit, citing what are now dated figures from 2001, said that women are grossly underrepresented among managers, holding just 14 percent of store manager positions compared with more than 80 percent of lower-ranking supervisory jobs that are paid by the hour. Wal-Mart responded that women in its retail stores made up two-thirds of all employees and two-thirds of all managers in 2001.
The company also has said its policies prohibit discrimination and that it has taken steps since the suit was filed to address problems, including posting job openings electronically. 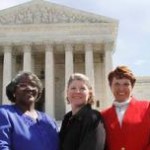 ...In this March 29, 2011 file photo, the five plaintiffs in a case of women employees against Wal-Mart, from left, Stephanie Odle, of Norman, Okla., Betty Dukes, of Pittsburg, Calif., Deborah Gunter, of Palm Springs, Calif., Christine Kwapnoski, of Bay P