Suzuki stays true to Back to School!

– Kizashi heads to campus as year’s most anticipated freshman.

BREA, Calif. – For parents and their offspring, the transition from end-of-summer to back-to-school needn’t be two distinct phases. In fact, with its efficient, recreational lineup of cars and trucks, there are few better ways of transporting yourself through all that’s offered by summer vacation while heading for campus with all that’s needed – including a bank balance – for fall’s deep dive into academia.

Regardless of academic direction, students will discover something appropriate at their nearest Suzuki campus. Members of the debate team will find the SX4 options especially compelling, with three distinct choices, all wrapped around one dynamic – albeit versatile – platform.

For the athletic, Suzuki’s SX4 Sport rides on a lowered suspension, with support provided by KYB shocks and direction supplied by 17-inch, 50-series rubber. Geography majors will be enticed by the SX4 Crossover, offering America’s most affordable all-wheel drive in combination with a standard navigation system, a versatile hatch and 30+ miles per gallon. The sporty five door also was recently named a 2009 Top 10 Back-to-School Car by Kelley Blue Book’s kbb.com. Scholars in pursuit of a degree in Urban Studies will find few things more urban than Suzuki’s new SX4 SportBack, an affordable, expressive entry in the hotter hatch segment.

Future Farmers – or Funsters – will want to pick up a few elective credits in Suzuki’s Equator pickup, entering its sophomore year. Offered in both extended and crew cab variants, and with either 2WD or 4WD drivetrains, the Equator is right-sized for the realities of both today’s economy and student parking lots. Moreover, as the winner of 4-Wheel & Off-Road magazine’s 4X4 of the Year award, the Equator can serve as both on-campus commuter and off-campus escape hatch.

Students pursuing a grad degree will want to consider Suzuki’s Grand Vitara, entering its own post-graduate phase with an aggressively upgraded drivetrain, along with numerous interior refinements. With a choice of an efficient four or highly refined V6, the Grand Vitara is a leading example of a disciplined approach to the compact SUV segment. With on-road composure supplied by an all-independent suspension, credible off-road capability via an available low-range 4WD, and a starting price point of under $20K, the Grand Vitara can handle any academic discipline, from economics to ecology.

Finally, Suzuki’s all-new 2010 Kizashi arrives on campus with concept-derived architecture, a Euro-inspired chassis and Japanese execution. In the pursuit of multicultural studies, few cars in its segment can supply the same balance of athleticism and intellect – with a base price leaving plenty of budget for books.

For those pursuing a career on campus, Suzuki’s catalog continues to offer America’s #1 Warranty, with seven years and 100,000 miles of transferable drivetrain protection. For copies of the full syllabus, students should visit the Suzuki campus, located online at www.suzuki.com.

The Brea, Calif.,-based Operations of American Suzuki Motor Corporation (ASMC) was founded in 1963 by parent company Suzuki Motor Corporation (SMC) and currently markets its vehicles in the United States through a network of approximately 400 automotive dealerships and numerous other motorcycle, ATV and marine distributors in 49 states. With global headquarters in Hamamatsu, Japan, SMC is a diversified worldwide automobile, motorcycle, and outboard motor manufacturer. In 2008, SMC sold more than 2 million new cars and trucks and more than 3.5 million motorcycles and ATVs. Founded in 1909 and incorporated in 1920, SMC has operations in 196 countries and regions. For more information, visit www.media.suzuki.com. 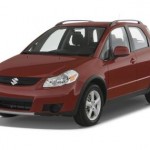