Teen gunman kills self after slaying 15 in Germany

WINNENDEN, Germany – A black-clad teenager opened fire at his former high school in southwestern Germany on Wednesday, gunning down students and teachers with a large-caliber pistol in a rampage that ended with 16 people, including the gunman, dead.

The 17-year-old entered the school in the town of Winnenden at 9:33 a.m. after classes had begun and opened fire, police said. He killed nine students and three teachers, apparently singling out female victims. Eight of the students were girls and all three teachers were women.

“He went into the school with a weapon and carried out a bloodbath,” said regional police chief Erwin Hetger. “I’ve never seen anything like this in my life.”

The gunman killed a male passerby outside the building before forcing his way into the backseat of a car and making the driver head south, according to Stuttgart prosecutors, who are leading the investigation.

Police launched a land and air manhunt. When the driver swerved off the road at a police checkpoint, he managed to escape.

The suspect, identified only as Tim K., ran into an industrial area in the town of Wendlingen with police in pursuit.

He entered an auto dealership, shooting and killing a salesman and a customer, both men, and went back outside, prosecutors said.

The guman opened fire at police vehicles in front of the auto dealership, prosecutors said.

“A gunbattle ensued between the 17-year-old and the many police,” the prosecutors’ office said in a press release. “According to our current information, the 17-year-old then shot himself.”

Police said the attacker’s father belonged to a gun club and owned 16 guns, one of which was missing. In their hunt for the gunman, police searched his parents’ home in a nearby town.

Police said the suspect graduated last year from the school of about 1,000 students.

No motive has been identified.

The death toll was close to that of Germany’s worst school shooting.

In the 2002, 19-year-old Robert Steinhaeuser shot and killed 12 teachers, a secretary, two students and a police officer before turning his gun on himself in the Gutenberg high school in Erfurt, in eastern Germany.

Steinhaeuser, who had been expelled for forging a doctor’s note, was a gun club member licensed to own weapons. The attack led Germany to raise the age for owning recreational firearms from 18 to 21.

“It is hard to put into words what happened today, but our sadness and sympathy goes out to the victims’ families,” Merkel said at a news conference.

The European Parliament, meeting in Strasbourg, France, stood in silence for a minute, to honor the victims.

“It is our task as responsible politicians in the European Union and, indeed, all the member states to do our utmost that such deeds can be prevented,” said EU assembly president Hans-Gert Pottering, a German. 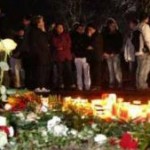