Hybrid vehicle sales catapulted more than 139 percent from 2004 to 2005 after increasing 81 percent from 2003 to 2004, according to R.L. Polk and Company. But they remain only slightly more than one 1 percent of the new-vehicle market.

California accounts for more than 26 percent of new hybrid registrations, with the L.A. area alone having 11.5 percent of 2005 registrations, according to R.L. Polk. It’s not just a West Coast trend, though: New York, Boston and Washington D.C. are also hybrid hot spots.

The 2007 model year promises further growth for hybrid vehicles — both in terms of the number of models and market share. General Motors will launch several hybrid SUVs, while Lexus debuts a range-topping large luxury sedan with a hybrid V8 to compete against other automakers’ V12s.

If these trends continue, gas/electric hybrid powertrains are destined to become options in plenty of popular vehicles over the next few years, which means drivers will get more power and better fuel economy. And isn’t that what we all want?

Here are the hottest

The redesigned Ford Escape boasts a higher hood and beltline for a more rugged look. The interior features seats made entirely of post-industrial, recycled materials and a suite of airbags. This is the first Ford to use the automaker’s new Ice Blue dashboard lighting color scheme. The Hybrid carries a 2.3-liter four-cylinder engine and an electric motor, drawing 155 combined hp; the non-hybrid is a 2.3-liter V6 generating 153 hp.

While European luxury automakers put out increasingly powerful and gas-guzzling V12 engines, Lexus has opted for a hybrid powertrain in its new top model. The LS 600h L features the world’s first full-hybrid V8, a 5.0-liter engine mated to two electric motors. Together they deliver 430 hp to all four wheels. The car debuts as a 2008 model and will only be sold in a long-wheelbase version.

The Aura Green Line will feature a 164-hp 2.4-liter four-cylinder gasoline engine paired with an electric motor/generator. This setup, which is the same as on the soon-to-be-replaced 2007 Saturn Vue Green Line compact SUV, cannot run on battery power alone. The system will boost fuel economy by 25 percent versus a Saturn Aura XE by shutting down the gasoline engine during temporary stops and upon deceleration, as well as by supplementing the gas engine during full-throttle acceleration. Production will likely begin in March.

While the Saturn Vue’s basic design has been around for a while, the Vue Green Line’s high-tech powertrain makes it considerably more attractive. With GM’s Belt Alternator Starter (BAS) hybrid system, the Green Line pairs a frugal 2.4-liter four-cylinder engine with an electric motor/generator system, together making about 170 hp. Despite being a truncated hybrid system, preliminary EPA estimates of 27 mpg city/32 mpg highway are impressive, as is the $23,000 base price. 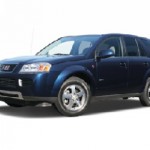