Dallas, Texas. The Oak Cliff Cinco de Mayo Big Parade was held on May 7, 2010 at 11:00 a.m.
on Jefferson Boulevard. The parade organizers reported a grand total of fifty-eight entries with
close to one hundred vehicles, groups and floats.

The Big Parade was headed by the W.T. White ROTC, the official color guard for several years,
directed by Lt. Col. Norm Gilmore, followed by Councilwoman Delia Jasso, the Parade Honorary
Chairwoman, accompanied by her husband, Judge Juan Jasso. The Cinco de Mayo Celebration
chairman, Rep. Roberto R. Alonzo, was busy in Austin with the legislative session. It was his
first time not participating in fifteen years.

Jesse Ramirez with Turn It Up Radio served as the Big Parade MC at the MC Stage in front
of Fiesta Mart (sponsored by Cash America Pawn). He was a very enthusiastic announcer
making his big debut in Oak Cliff. Turn It Up Radio is an online hip-hop radio station –
www.turnitupradio.com.

Attendance was undetermined but was lower than previous years. Sylvana Avila-Alonzo, the
event coordinator, said that moving the Festival from Jefferson Boulevard probably had a big
effect on attendance. However, the Festival at Casa Guanajuato was well attended with over

1000 guests. There was an increase in vendors for a total nineteen.

Avila-Alonzo also thanked the volunteers for their continued support and commitment in helping.
“The volunteers are the backbone of the event. They work for hours in the hot sun and with
no special gadgets like radios or transportation. They walk up and down the boulevard before,
during and after the event.” She added that OCCA will sponsor a cook-out that she will host to
show appreciation.

She also expressed gratitude to Mayor Dwayne Carraway, the Office of Special Events, and
Officer George Aranda for their support. 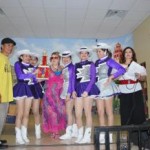