The Ambassador of Ranchera Music, Vicente Fernández once again brings his musical tour through the State of Texas. One must only recall last year his tour was a total success selling out every venue he performed from east to west, south to north in the U.S.

This year will not be the exception “The King of Ranchera Music”, is ready to return to Houston. He will perform on Friday, October 9th at the American Airlines Center. It will surely be a night to remember just witnessing one of his performances will certainly transport many to remember the beauty Mexico has to offer.

Vicente Fernández Gómez is his given name and he has represented Mexico all over the world. He has become the person that best represents Mexican music and one that has not had to change his genre of music to “fit in” with the youth of today.

His artistic career spans forty four years and is known to his fans as simply “Chente” who they fully identify with. His new CD will be released on July 7th “Necesito de Ti” and which no doubt will also be a total success as his previous ones.

Vicente Fernández is a good husband, good father; good grandfather but above all an icon for all those that identify with his humility and down to earth character that he is known for.

His compatibility with so many of his fans stems from the fact that everyone strives for a better life, as he once did as a labor worker. Therefore with the humble upbringing his parents instilled in him, he has come a long way and has achieved the success that many only dream of and has become “Mexico’s living legend.”

This year the “King of Ranchera music” will be touring with one of the most beautiful women in Latin America, Shaila Durcal. She has inherited an impressive talent which she will share with her public during this tour.

Do not forget this date because “Chente” will give you an evening you will not soon forget, because to see this great legend is an experience that each time is unique. This event is brought to you by Ralph Hauser Promotions and SC Entertainment.

Tickets are already on sale and can be purchased at select Super Mercado Fiesta stores, and the American Airlines Center box office or visit www.ticketmaster.com. 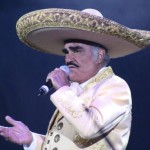