Volcano erupts in Indonesia days after devastating earthquake and tsunami

A volcano erupted Wednesday on the same island in Indonesia where an earthquake and tsunami last week killed at least 1,400 people.
The eruption of Mount Soputan on Sulawesi island in central Indonesia prompted authorities to warn of possible lava flows and ash clouds that could impact air travel. Evacuations were ordered for those living within a few miles of the volcano.
The eruption spewed ash 19,700 feet into the sky.
Scientists have not yet determined whether the eruption was directly triggered by the earthquake in central Sulawesi on Friday. However, Indonesian news portal Tempo cited a government volcanologist who suspected it was.
Indonesia has many active volcanoes. It is also located in the “Ring of Fire,” one of the most active areas for earthquakes in the world.
President Donald Trump called Indonesian President Joko “Jokowi” Widodo on Tuesday to offer assistance with both the emergency phase and reconstruction from the earthquake and tsunami that struck Sulawesi.
In addition to the growing death toll, hundreds of people were severely injured in Friday’s disasters. With many roads blocked and key communication lines and infrastructure destroyed, food, water, fuel and medicine are struggling to reach the hardest-hit areas outside Palu, the largest city heavily damaged. More than 60,000 people have been displaced, according to the National Disaster Mitigation Agency. 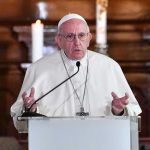 Pope Francis gives a speech during an ecumenical meeting with youth on September 25, 2018 at the Charles Lutheran church (Kaarli Kirik) in Tallinn, Estonia on the third day of his Baltic tour. (Photo by Vincenzo PINTO / AFP) (Photo credit should read VINCENZO PINTO/AFP/Getty Images)