SUNDAY– Weight-loss surgery doesn’t decrease the risk of death among severely obese middle-aged adults, a new study says.
U.S. researchers looked at 850 male patients at Veterans Affairs medical centers who had weight-loss (bariatric) surgery between January 2000 and December 2006. Their average age was 49.5 and their average body mass index was 47.4 (a body mass index, or BMI, over 40 is considered severely obese).
The death rate in this group of patients was compared to that of a control group of about 41,000 VA patients (average age 54.7, average BMI 42) who didn’t have surgery.
Eleven of the 850 bariatric surgery patients (1.29 percent) died within one month after surgery. Unadjusted analysis of the death rates over a six-year period showed that the bariatric surgery patients had lower death rates than those in the control group, but further analysis showed that bariatric surgery was not significantly associated with reduced risk of death, said Matthew L. Maciejewski, of the Durham VA Medical Center in Durham, N.C., and colleagues.
The study, published online and in the June 15 print issue of the Journal of the American Medical Association, was to be presented Sunday at an AcademyHealth research meeting in Seattle.
Even though bariatric surgery doesn’t reduce the risk of death among middle-aged male patients, many of them still decide to undergo the procedure because there’s strong evidence that it reduces body weight and obesity-related health problems, and improves quality of life, the researchers said.
More information
The U.S. National Institute of Diabetes and Digestive and Kidney Diseases has more about bariatric surgery. 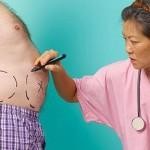